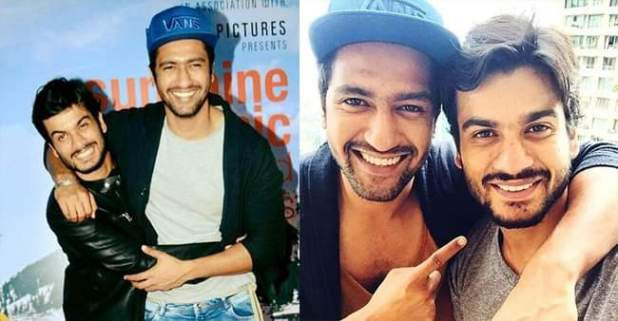 Vicky Kaushal has surely got a huge fan following after he played the role of an Indian Army officer  in ‘Uri-the surgical strike’ and most of the people knows that Vicky Kaushal still continues to be the national crush of India. But when it comes to his younger brother, Sunny Kaushal then he is no less. Both Kaushals, Vicky and Sunny attended the Grazia Millennial Awards 2019, hosted last night and their style is definitely one of a kind. Gracing the event in subtle pastel coloured suits, the Kaushal boys really stole the show.

Dressed in an olive green coloured suit by Sahil Aneja and a plain white t-shirt by Zara, Vicky was looking too damn handsome. Even though his outfit did not have any prints, it looked absolutely dapper. Whereas, Sunny was wearing a sky blue coloured, belted suit by Karrtik D and a pastel pink t-shirt by Zara. And now their fans cannot really wait to see these two brothers star in a film. Both their looks were styled by Vicky’s stylist, Amandeep Kaur and we couldn’t be more grateful of her for letting us see these hunks in such bespoke colours.

On the work front, Vicky Kaushal will next be seen in Sardar Udham Singh and has also announced to be a part of Bhoot: Part One – The Haunted Ship with Bhumi Pednekar as his leading lady. And Sunny will be seen in Bhangra Paa Le and was recently announced as the lead hero of Hurdang where he will be working alongside Nushrat Bharucha and Vijay Varma.