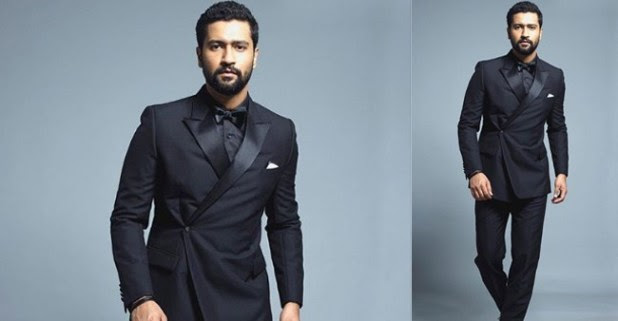 Talented Vicky Kaushal is one of a kind actor in Bollywood.  He made big name in Hindi film industry with his tremendous work so far. He never fails to make a statement with his oufits and his looks can never go unnoticed.  He surely sets goals for the youngsters about fashion statement.  He seems to be the perfect guide to tell us about how to suit-up perfectly.

Vicky Kaushal has always been simple with his dressing.  He has a great sense of fashion and won the hearts of his fans for his great taste.  He always makes sure to dress up to his best whenever he steps out.  His recent appearance in an event shows how good he dresses up when he steps out and how handsome he looks in a black suit.

Vicky recently appeared to Femina Miss India event where he was seen wearing an all-black suit by Dior.  To complemented the suit look by adding a white pocket square. The suit looked great on him with buttons on the side. Vicky added a silk bow to complete the look.

Vicky who always wears simple attires looked great in a suit.  It is the first time we have seen him in a suit.  Till date Vicky shares many pictures with suit look on his Instagram account.  No matter what he weras, he just looks handsome anyway.  Not just in suit, he looks stunning in just anything he wears from hoodies to leather jackets.

Coming to the professional front, Vicky delivered great movies like in the past year like Raazi, Sanju, and Manmarziyaan. He also won a Filmfare award for Best Supporting Actor for Sanju. The actor received a huge hit with the success of Uri: The Surgical Strike.  The movie did read at the box and grossed up to RS 336 crores. Vicky has projects lined up and his next is Bhoot – Part One: The Haunted Ship that will hit the screens on November 15, 2019. The actor will also be seen in Sardar Udham Singh.