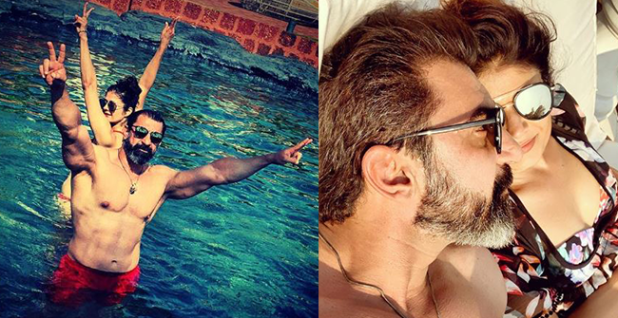 Pooja Batra, the Virasat actress and actor Nawab Shah of Tiger Zinda Hai have fallen in love with each other. Nawab has acted in some amazing movies which include Bhaag Milkha Bhaag, Tiger Zinda Hai, Don 2, Dilwale, etc. Whereas, Pooja has also acted in various movies like Virasat, Bhai, Farz, Haseena Maan Jaayegi, Nayak: The Real Hero, ABCD 2, etc. The actress has chosen to remain off – screen for some time but just now she came under the tracking of the media once again when her latest pictures with Nawab Shah were posted on their social media handles.

On his Instagram handle, Nawab has recently shared some pictures in which he can be seen spending some quality time with the Virasat actress, Pooja. The adorable pictures of the couple have definitely taken everyone by storm. Earlier this month on the occasion of Eid, the two of them have made their relationship official.

Nawab had shared a picture of Pooja on Instagram where he can be seen holding her hand. ‘It took 46 years for my soul to be Ready, and then my mate appeared. Eid Mubarak soulmate. Eid Mubarak to all’, the caption of the picture reads. Pooja also shared another picture of herself on Instagram where she added the caption, ‘Life’s a party when you are with your soulmate.’

On the work front, Nawab Shah will be next seen in the upcoming movie Dabangg 3 which features Salman Khan and Sonakshi Sinha in the lead roles. It happens to be the third installment of the Dabangg franchise and is directed by Prabhu Deva.