This Perfect Picture Of Ambani Family Will Make Your Day 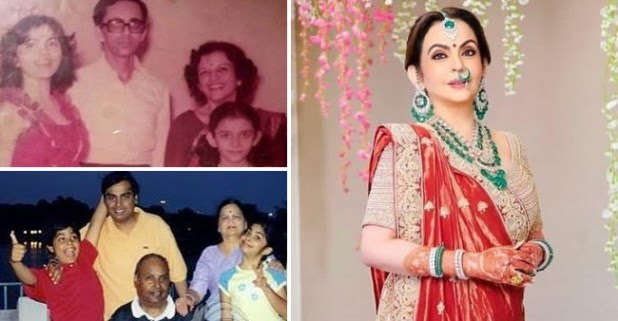 Business Tycoon and the richest Indian Mukesh has been happily married to his wife Nita Ambani for 32 years. Even after more than three decades of marriage, they never fails to create their charm wherever they go. Also, their pictures on social media always give couple goals to all. Recently, a few rare throwback pictures of them were shared by a fan page on social media handle, Instagram.

Check out the pictures right here:

In the first picture, the power couple Mukesh and Nita Ambani is seen with Mukesh’s parents Dhirubhai Ambani and Kokilaben Ambani. Mukesh Ambani donned a grey suit, his wife, Nita Ambani wore a golden saree. And it looks like this picture was taken when Nita was newly married.

In the picture, she is seen with her parents and younger sister. The family is smiling for the camera and made it a perfect family photo.

Last but not the least, the picture shows the entire Ambani family. Mukesh Ambani with wife Nita, parents Dhirubhai Ambani and Kokilaben Ambani and their kids Isha, Akash and Anant Ambani. All are happily posing for camera.

Talking about the couple’s love story, it is said that it is started after Mukesh’s father Ambani spotted Nita at a dance recital. Dhirubhai introduced them to give a chance to each other. Mukesh and Nita are blessed with three children; Anant Ambani, Akash Ambani and Isha Ambani. Isha Ambani and Akash Ambani have tied the knot with their respective partners. Isha married to her childhood friend and beau Anand Piramal. While, Akash got married to the daughter of diamond merchant, Shloka Mehta. Their youngest kid Anant Ambani is dating beautiful Radhika Merchant. She was spotted many times with Ambani family and term as choti Ambani bahu. Her appearances at the wedding of Isha and Akashput the rest to all the rumours of her dating with Anant.