The beautiful, Hina Khan shines like a star wearing the best ever shade of yellow 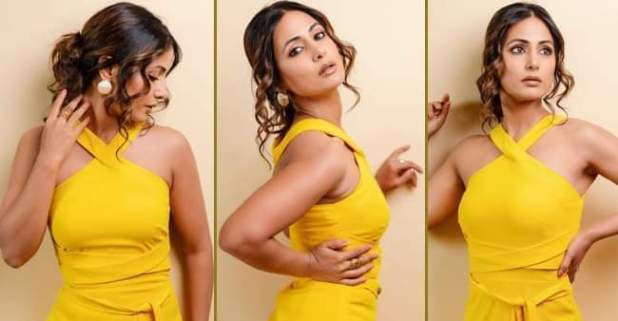 The one who has successfully made a name for herself as the upcoming fashionista is none other than Hina Khan. Ever since she established herself as the upcoming fashion icon post her stint in Bigg Boss, people have only seen her game getting a notch higher. Hina did wow her fans as she made her debut at the Cannes Film Festival 2019 and she was a complete stunner there too and so, she continues to do what she does the best.

On the night of 19th june, Hina attended an event and for the event, she decided to go with the best ever shade of yellow, not so bright but not very dark either and the overall look has our hearts. Hina put together a yellow dress with double slits on either side, a cross over neckline and a knot at the waist. She paired the ensemble with golden heels while tied her hair letting some of them fall free on the sides and her makeup was sheer perfectness yet again.

The beautiful actress, Hina Khan, recently told us about how Cannes was a dream and the entire experience. “I have followed the Cannes Film Festival for years and so, of course, being at the prestigious platform walking at the red carpet as well as speaking was a huge honour” She said. She further added, while talking about Lines, “Lines is a film that is extremely close to my heart. Its a very different film, simple in its own way and I feel it is the simplicity of the film that shall make it a winner all the way”.