Sun-ki**ed selfies of Kareena, Saif and Taimur from Tuscany 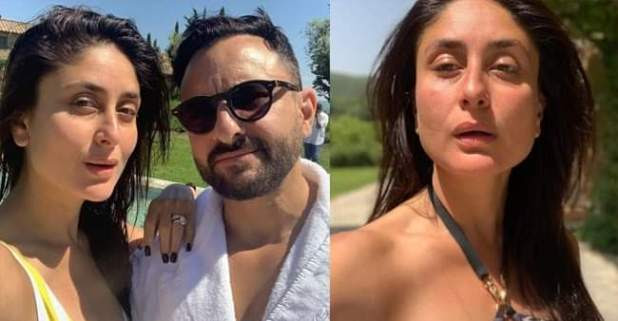 Actor who is well-known by the name Bebo, Kareena Kapoor is in Tuscany with husband Saif Ali Khan and son Taimur on a family vacation. Her latest sun-kissed selfies from the picturesque location prove the actor is enjoying her time in the sun.

Kareena’s two new selfies have surfaced on the web. Kareena can be seen posing for the camera in a black, floral, halter-neck outfit without makeup.

While she is seen with shades in one selfie, the other picture shows her soaking in the sun at a quiet place.

The family of three were seen departing from the Mumbai airport and had flown to London around a week ago.  Kareena was in casuals and an overcoat, whereas Saif was in formals and Taimur in a night suit. Kareena’s stylist Poonam Admania had shared a few more pictures of the family.

Poonam shared a picture which shows Kareena holding Taimur in her arms with Saif beside her, as they pose amid lush green surroundings. “Hello from Tuscany from the Pataudi’s,” Poonam captioned the picture on Instagram. In another picture, they can be seen posing on a busy street. One more picture of Kareena and Saif taking a selfie next to a swimming pool was also shared by Poonam.

Media reports suggest that Saif will also catch a match during the ongoing cricket World Cup in England.

Saif is set to return with the second season of Netflix’s Sacred Games. He will also be seen in Ajay Devgn’s Tanhaji: The Unsung Warrior and Bhoot Police. Kareena has just made her television debut as a judge on dance reality show, Dance India Dance. Her upcoming films include Good News with Akshay Kumar, Diljit Dosanjh and Kiara Advani and Angrezi Medium with Irrfan Khan. She will be playing a cop for the first time in the Hindi Medium sequel. Later this year, she will begin shoot for Karan Johar’s Takht.