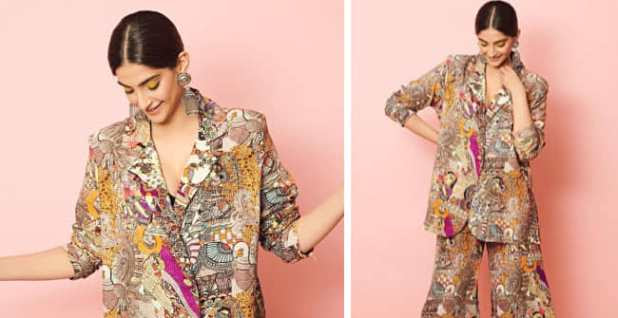 Sonam Kapoor, a fashionista in Bollywood film industry is currently setting a trend with her extraordinary fashion sense. The actress gains massive attention from her fans and co-stars with her stunning stylish outfits. When it comes to fashion, the actress often takes risks and redefines fashion for the Bollywood industry.

With an intention to celebrate the power of love, the actress has planned to go all technicolor. She wore a stunningly beautiful technicolor jacket paired with half pants. From the picture, we can spot Sonam Kapoor looking radiant from every corner. Anamika Khanna has designed this trendy outfit to the actress. All credits will go to Rhea Kapoor, the sister of Sonam Kapoor who is a stylish and film producer. She is the one who has selected an outfit for Sonam.

Keeping aside her routine style of footwear, the actress opted to wear a pair of high rise boots from Stuart Weitzman. In recent times, Sonam Kapoor has shared a series of pictures on her official Instagram account with her fans and followers. From the picture, we can witness Sonam Kapoor was all smiles on her face posing to the camera.

Sunita Kapoor has designed the earrings of the actress while Sanya Kapoor has assisted her. She added the picture and captioned it as ‘Dreaming in Technicolour

#pride#loveislove#instalove#lovewins.’ From the next picture, we can spot Sonam Kapoor in the same dress with a secret smile on her face. She then captioned the picture as ‘I’ve got a secret smile and I use it only for you!’

The actress looked in a unique style with a pair of stylish boots. She captioned the picture as ‘Forget glass slippers, this princess wears boots.’ With her graceful look, the actress grabbed the attention of thousands of people and commented on the picture. She added exceptional captions to her funky look.

With an intention to enhance her look, Sonam Kapoor gave a traditional touch to her stylish appearance. Savleen Manchanda is the makeup artist of the actress. She emphasized the eyes of Sonam with a yellow eye shadow. Her pair of Jhumkas from her mother Sunita Kapoor’s label has augmented her look.