Singapore roads get public buses carrying plants on their roofs 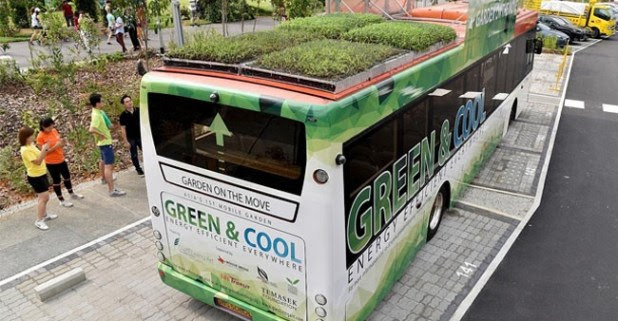 Singapore’s first public buses carrying plants set up on their tops – touted as the first of its kind in Asia – reached the roads already.

The Garden on the Move programme initiated by urban greenery professional GWS Living Art got introduced at Lakeside Garden.

Amongst the buses with the set up plants is one, which got utilized for a shuttle service in the Lakeside region and will currently be utilized to carry out an SBS Transit course. The special service got utilized to ship visitors to the Singapore Garden Festival Horticulture Show that concluded recently, to and from Chinese Garden MRT station and Lakeside Garden.

The proposal is part of a 3-month research to witness whether the temperature within the buses can get lowered, potentially saving on fuel.

The research includes another nine buses utilized for SBS Transit services, comprising services 139, 145, 13, 39 and 45 which function in places like Toa Payoh, Tampines and Orchard Road.

The buses get set up with a locally built soil-less arrangement named Gaiamat.

The proposal gets financially supported by the Temasek Foundation and backed by the National Parks Board (NParks), Moove Media and the Singapore Green Building Council.

GWS Living Art founder Zac Toh stated, “For me, cities should co-exist with nature. Through this project, we hope to raise more consciousness of how ‘green roofs’ are significant in a city.”

For the research, two patches of soil-less vegetation have been set up on each bus. Each piece, or unit, measures 1.8m by 1.05m and carries a weight of 40kg.

According to Dr Tan, a research fellow at the NUS School of Design and Environment, thermal sensing elements will get positioned on the buses’ rooftops under the plants, and on the base of the top of roof.

“To combat the urban heat island effect, we need to reduce temperature outdoors. By having greenery on surfaces such as on vehicles, it plays a part. It’s the same thing as having parks. Collectively, if we have enough vehicles and buildings with green roofs, we can reduce outdoor temperature, especially at night.”

Mr Oh Cheow Sheng, group director at NParks, stated that the project is an imaginative proposal, which seeks to expand Singapore’s greening endeavours.

“We hope that this will spur others to explore other similarly innovative ways to ‘green’ up Singapore.”