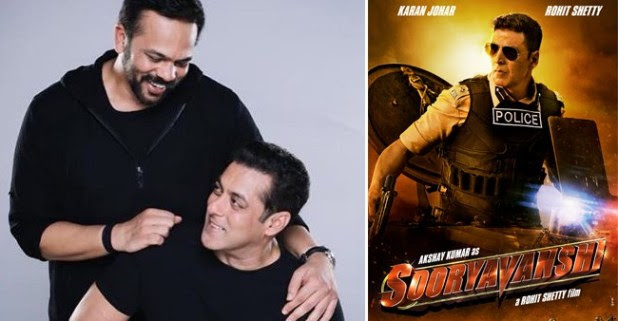 When the release date of Salman Khan-star Inshallah got declared a few days back the only thing buffs could dwell on was its fight with Akki’s Sooryavanshi as both the flicks were planned to reach screens on Eid 2020.

But, yesterday, Sallu took to social media and declared that Sooryavanshi’s release date has been altered.

Sharing a picture with Rohit, the 53-year-old actor wrote, “I always thought of him as my younger brother and today he proves it… @itsrohitshetty Sooryavanshi releasing on 27th March, 2020.” Reposting the same photo, Rohit later wrote, “You can Compete with the World but Not with your Family…See you soon Chulbul Pandey!!!”

The Hrithik Roshan flick that has been helmed by Vikas Bahl was believed to hit theaters on January 25 and after that, on July 26. But at the present, its release date is announced as July 12.

Mental Hai Kya was proposed to reach theaters on June 21 but currently, it will reach the screens on July 26.

The dance movie will showcase Varun Dhawan, Shraddha Kapoor and Remo D’Souza’s second alliance. At first, Street Dancer got planned to reach the screens on November 8, 2019, but currently it has been shifted to January 24, 2020.

The movie that has Ranbir Kapoor and Alia Bhatt in lead roles was first proposed to reach theatres on Christmas this year. But during April, Brahmastra’s maker Ayan Mukherji declared the alteration in the time. It will now reach theaters in Summer 2020.

Kriti Sanon and Diljit Dosanjh flick Arjun Patiala was previously planned to reach theaters during May. But currently it will hit the big screens on July 19.

Sushant Singh Rajput and Jacqueline Fernandes flick Drive was planned to hit theaters in 2018 during the month of September but owing to postponement in shooting, it got shifted to June 28, 2019.

Directed by Dibakar Banerjee, Sandeep Aur Pink Faraar is a black humor featurring Arjun Kapoor and Parineeti Chopra. The film was planned to release on March 1, but owing to its collision with Sonchiriya and Luka Chuppi, the film’s date got changed.

Jabariya Jodi will be Sidharth Malhotra and Parineeti Chopra’s second alliance, was planned to reach the theaters on July 12, 2019, but now it has been postponed to August 2, 2019.

Featurring Sonam Kapoor and Dulquer Salmaan in key characters, The Zoya Factor was firstly planned to reach theaters on April 5, 2019, but afterward, the date got shifted to September 20, 2019.