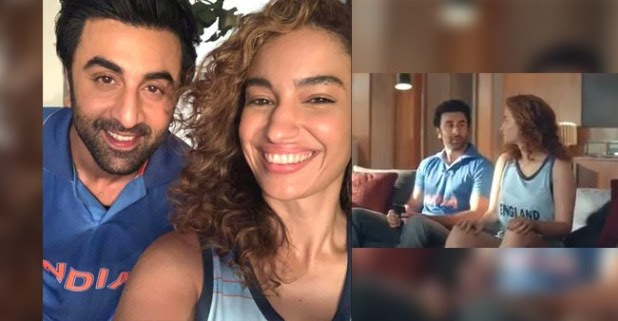 A new picture of Ranbir Kapoor posing with the actress Elena Fernandez is circulating on social media. Ranbir and Elena both are looking really happy in the picture. In the photo, both are seen with the cricket love for their country. Both are seen in their charismatic smiles.

Ranbir and Elena are together for the ad shoot for the popular deodorant brand and they can be seen bonding over their love for cricket. Elena shared the picture on her social media handle and wrote ‘That’s me screaming in support for India with an England shirt on with #ranbirkapoor. Let the cricket mania commence!!!!’

Moving to the professional front of Ranbir, the actor is currently shooting for Brahmastra which also stars his girlfriend Alia Bhatt and superstar Amitabh Bachchan. The team of Brahmastra was in Varanasi for a 20-day long shoot. Said the source, “Cameras for Ranbir Kapoor, Alia Bhatt and Mouni Roy starrer film are set to roll at the end of this month in the city, preparations for which have already begun.During their 20-day schedule, the film will be mostly canned at the Ramnagar Fort and parts of it inside Chet Singh Fort in Varanasi, for security reasons. The film’s sets are already under preparation inside the Ramnagar Fort. Ranbir, Alia and Mouni are expected to shoot for the film in Varanasi.” The film is directed by Ranbir’s best friend Ayan Mukerji and produced by Karan Johar. It will serve as the first film in a planned trilogy.

Ranbir Kapoor has Shamshera in his kitty after Brahmastra. In the film, he will be seen alongside Sanjay Dutt and Vaani Kapoor.

As per the rumours, after ‘Ae Dil Hai Mushkil’, director Karan Johar is planning to rope in Ranbir Kapoor in his upcoming movie ‘Takht’ for a cameo. The multi starrer film stars Ranveer Singh, Alia Bhatt, Kareena Kapoor Khan, Janhvi Kapoor, and Vicky Kaushal. If it would be possible, then Ranbir will again be seen with his girlfriend Alia Bhatt after Brahmastra.