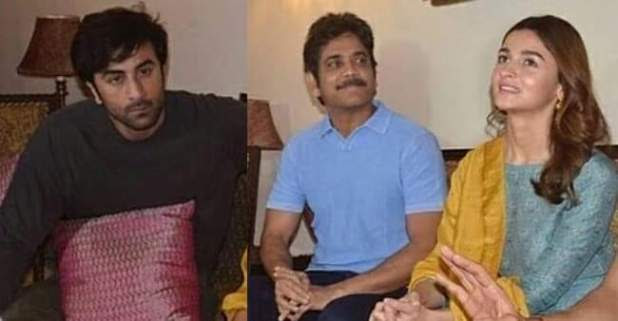 The Varanasi schedule of Ayan Mukerji’s next Brahmastra is currently on pace. The whole starcast of the movie except the Super star Amitabh Bachchan and Dimple Kapadia came up for a press conference. Ranbir Kapoor, Alia Bhatt, Nagarjuna and Mouni Roy marked their presence in the conference and are also shooting some intense scenes from the movie in Varanasi.

Pictures of Alia Bhatt and Ranbir Kapoor filming a boat sequence has already made it to the Internet. The next day the two were seen posing with their fans at a fort where the duo was shooting major portions of their upcoming movie.Previously, the duo was seen visiting a temple in Varanasi and were seeking blessings from the god.

This is the first time that the entire cast was seen together in a single frame. Yesterday a press meet for the local media was organised in Varanasi and can clearly see how Ranbir Kapoor was totally in it. Alia was in between joining the actor in the discussion. Check out the pictures below.

Ayan Mukerji’s Brahmastra is a fantasy film which is going to be released in three parts. The first part is assumed to be released by summer 2020. The director Ayan Mukerji and producer Karan Johar tells how special the film Brahmastra is to them and it surely deserves all the time, energy and effort that the team is investing in to make it a dreamy experience for the audience.

This is Ranbir and Alia’s very first movie together. Are you guys excited to watch it? Comment below and tell us.