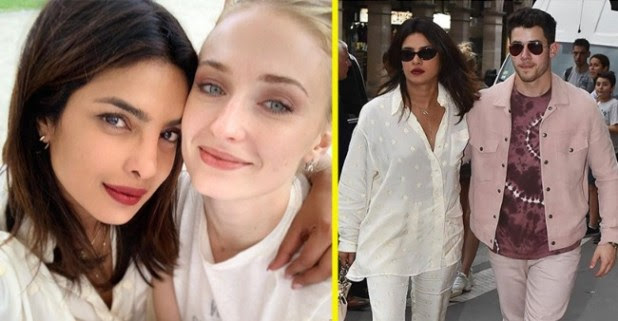 Priyanka Chopra, the popular actress in Bollywood recently arrived in Paris and met Sophie Turner prior her wedding with Joe Jonas. Both the sisters looked close to each other in the recent picture. We all know that Sophie Turner and Joe Jonas tied a knot together in an intimate wedding in Las Vegas in recent times.

The couple has once again planned to get a second and formal wedding in Paris. Before the wedding, Priyanka Chopra and her husband Nick Jonas reached Paris and met the actor Sophie Turner. The actress shared a picture with the Game of Thrones fame Sophie on her official Instagram account. The paparazzi have spotted them while enjoying their luscious lunch.

She added a picture and captioned it as ‘Her @sophiet’. She showered her love and affection on Sophie by adding heart-eyes emojis. Immediately, Sophie responded to the picture and commented on the picture. She wrote, ‘I love youuuuuu.’ Some of the fans and followers couldn’t stop themselves from dropping comments over the picture.

Some of them wrote ‘Devrani Jethani ka Pyaar. Hara bhara Ghar pariwar. jeete rho meri bacchiyoo.’ From the picture, we can witness Priyanka and Sophie wearing similar white outfits giving us major sister goals. Some other comments read, ‘Being someone who is in a relationship with someone outside of my culture, it just warms my heart to see interracial families!! I love it!’ Another comment reads, ‘My two fav things in the world’.

On Sunday, Joe and Sophie shared an adorable picture from the Eiffel Tower and the couple captioned it as ‘Me.’