MS Dhoni Should Be The Ambassador Of Yoga, Fans Posted His Pictures On International Yoga Day 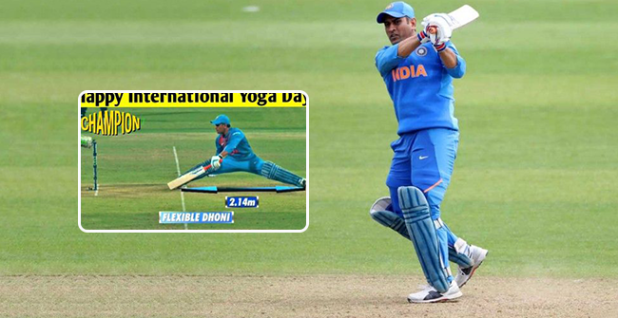 Not only India but the entire world celebrated the fifth International Day of Yoga with enthusiasm and zeal. Various programmes were held to mark the occasion. Thousands of young and old people joined the various events on the day and even Prime Minister Narendra Modi performed asanas along with nearly 30,000 people at an event held in Ranchi.

In the row, many cricketers too joined to do Yoga and share their pictures doing asanas with their fans. But, what grabbed everyone’s attention is former Indian captain MS Dhoni. Yes, Dhoni who is not very seen in taking part in such events trended on social media like a viral thing. Netizens and fans of MS Dhoni decided to post pictures of MS Dhoni showing how he practices Yoga even while playing cricket in the field. And must admit, the pictures showed Dhoni’s amazing feats of flexibility and hailed him as a ‘true ambassador of Yoga’.

Check out the posts of twitteratis:

A user shared the picture of Dhoni which shows his flexibility in the field. He captioned the picture: International Yoga Day winner msdhoni drharshvardhan

Another user wrote: “Happy Yoga Day. And Thanks to MS Dhoni for Promoting Yoga in Cricket since 2004

The former cricket is currently in England with the team for the 2019 ICC Cricket World Cup. India won the last match against Pakistan on Sunday and is to take on Afghanistan on Saturday in the their next match.

Meanwhile, Pakistan’s Federal Minister for Science and Technology, Fawad Chaudhry hit out at Dhoni after the he sported regimental dagger insignia of the Indian Para Special Forces on his wicket keeping gloves in the World Cup. He tweeted:

Dhoni is in England to play cricket not to for MahaBharta , what an idiotic debate in Indian Media,a section of Indian media is so obsessed with War they should be sent to Syria, Afghanistan Or Rawanda as mercenaries…. #Idiots https://t.co/WIcPdK5V8g

“Dhoni is in England to play cricket not to for MahaBharta , what an idiotic debate in Indian Media, a section of Indian media is so obsessed with War they should be sent to Syria, Afghanistan Or Rawanda as mercenaries.”

The rules of the International Cricket Council(ICC) clearly state that “equipment and clothing regulations do not permit the display of messages that relate to political, religious or racial activities or causes during an international match.”