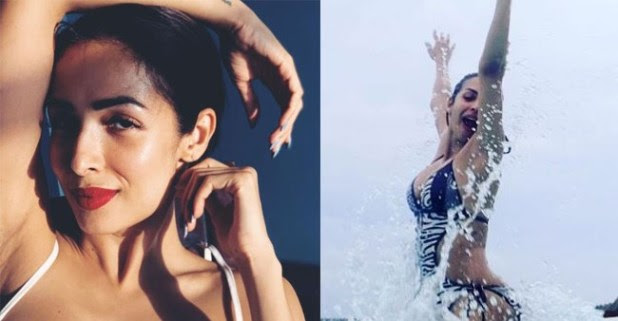 Malaika Arora, the most popular actress and dancer in the Bollywood film industry recently added few pictures on her Instagram account. The actress looked truly happy with the pictures. As Malaika Arora is an active user of social media, she has started updating her pictures and videos quite often to her account.

All her fans have started commenting and liking her pictures. She has been in the news quite for a long time after being in relationship with her rumored beau Arjun Kapoor. Arjun Kapoor has already given a justification to his relationship. But, he has declined the wedding rumors with Malaika Arora.

On Friday, the actress took her Instagram account and added a picture of her in Monokini avatar. She then captioned the picture as ‘It’s FRIYAYYYYYYYY …. this summer heats got me frolicking #TGIF.’ From the picture, we can witness the actress like the happiest soul. The actress even posted some other pictures in a stylish and trendy monokini.

The actress shared a series of pictures and captioned it as ‘Being happy is a choice .n I choose to be happy ….. also I think happiness looks good on me …… so keep ur opinions n ur negativity to urself n spare me ur crap not interested toobusybeinghappy notimefornegativity  tuesdaythoughts 43nhappy.’

In recent times, the actress made headlines for posting an adorable comment on the post of her beau Arjun Kapoor. The post is all about a quote that says the significance of smiling. As per the reports, the actress asked him to keep smiling always.