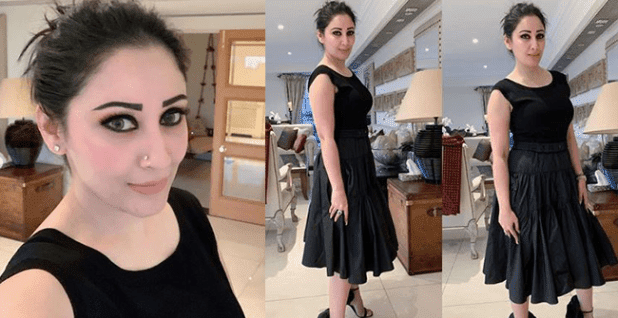 The one celebrity who time and again makes an appearance in our fashion fiasco list is none other than Maanayata Dutt and this time too it is no different.

She, to the images, gave caption as – “She was special… she combined a mean angel and a kind devil #blackisbeautiful #love #grace #positivity #dutts #beautifullife #thankyougod”.

The 39-year-old beauty in the images can be seen in an all-black attire. Maanyata wore a figure-hugging sleeveless simple black top which she paired with a weirdly frilled A-line black skirt.

The fall of her knee-length skirt was not at all complimenting. Generally, all black attires are a safe bet but not in this case. Maanayata paired her attire with black strappy heels which is the only thing in the attire which is looking good.

She, for her glam, tied her hair in a messy bun and went with a nude lip but with very heavily kohl clad eyes. These pieces, Maybe, would have worked better separately, but they do not look that great when pieced together.

Just a few days ago, Maanayata Dutt has shared an adorable picture of herself twinning with her daughter while they were on a shopping trip. On the instagram she gave a very sweet caption and that was obviously intended towards her daughter. Maanayata’s caption said – “Stay together…grow together….happiness is you #justanotherday #love #grace #positivity #dutts #beautifullife #thankyougod”.