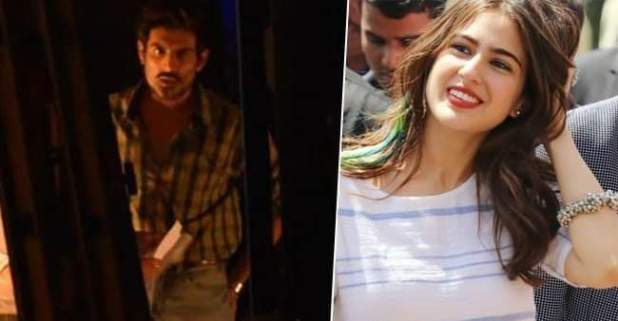 Nation’s crush and heartthrob of Bollywood Kartik Aaryan is as of now shooting for Imtiaz Ali’s Love Aaj Kal 2. While a few photos of his different looks are now out, first pictures of Sara Ali Khan from the sets of the film are currently doing rounds on the various social media platforms.

Sara Ali Khan was seen in a lime green top and a denim combined with pointed heels. The actress was seen with makeup and quirky green hairdo. Her hairs were braided with green locks on both sides.

On the other side, Kartik Aaryan was seen donning a retro look with a mustache, larger than usual shirts and loose high-waist denim. He was snapped in two different  looks on the sets of the film.

Kartik had before travelled to Udaipur for the film shoot. They wrapped up the Rajasthan schedule a couple of days before coming back to Mumbai. Pictures of Kartik as a young lad were shared from Udaipur. He was seen in a clean-shaven look, wearing a school uniform, and a silver ring in his ears and was riding an old scooter with his companion.

Other than Sara and Kartik, The film also stars Randeep Hooda and he has simply wrapped up shooting for his part. He had before worked with Imtiaz in 2014 film Highway with Alia Bhatt. He likewise shared an emotional social media post about his experience of working with him once more. “And, it’s a wrap for me for Imtiaz Ali’s next… wonderful reunion after 5 years of the iconic ‘Highway’… An honest experience as always…The joy of work, pushing boundaries … A rediscovery as an artiste, as an individual,” he wrote.

The movie is a sequel to Saif Ali Khan and Deepika Padukone starrer  ‘Love Aaj Kal’ and is all set to be slated around Valentine’s Day next year.