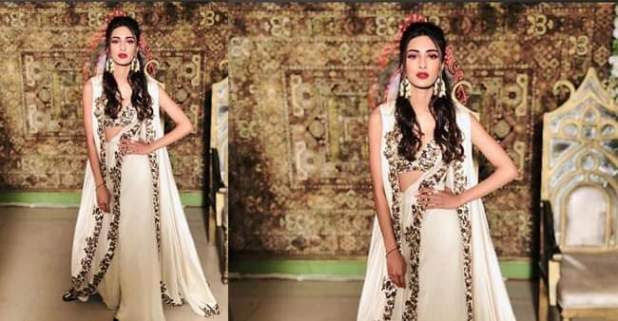 Erica Fernandes  is an Indian actress and model known for her portrayal of Dr. Sonakshi Bose in ‘Kuch Rang Pyar Ke Aise Bhi’ and Prerna Sharma in ‘Kasautii Zindagii Kay’.

Erica Fernandes is a diva and there is no second thought about this. Not only in the western but she looks gorgeous in the traditional avatars as well. From sarees to lehengas, this woman is a slayer in the truest sense. Recently, she did a saree with a twist and her regal charm captivated people and her fans are just Amazed.

‘Kasauti Zindagi Kay2’s viewers favourite ‘Prerna’ put her most fashionable foot forward for an event and her contemporary avatar left everyone stunned. Erica went for a gorgeous saree, adorned with golden embellished borders and gave us some major indo-western style goals. She wore the saree with palazzos and draped a particular part like a cape jacket. That is totally badass. She accessorized her offbeat style with golden earrings and while her makeup was minimally subtle, the red lipstick did pop out just fine. Fans would definitely be taking notes of this ensemble for the next reception party.