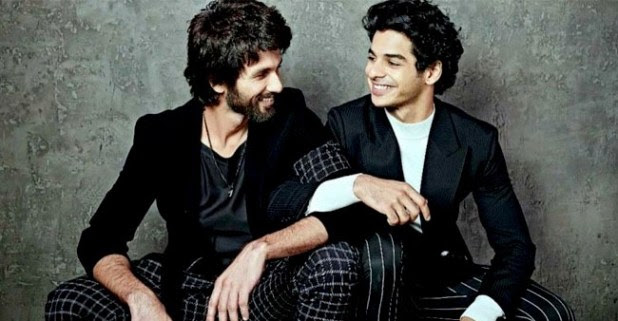 The Padmavaat actor Shahid Kapoor no doubt is one of the stunner and fashionable actor in the Bollywood industry. When it comes to experimenting with clothes, he never steps behind. The fashion style game by Shahid is never a disappointment and always sets a fashion goal. The actor next will be seen in Kabir Singh and for the promotion of his movies he was recently spotted wearing a bright yellow kurta and trendiest sunglasses.

The new avatar by actor manages to impressed his fans and followers. He shared the photographs in his lit outfit and captioned it “#Kabirsingh promotion chalu machaaaa” . However, what attracted the attention was the comment of his half brother Ishaan Khatter who made an interesting observation about his recent look. The younger brother in the comment section left a mango emoji which means he is comparing the stunner Shahid look with a mango. This clearly shows that your sibling leave no chance in pulling your leg whether it be in public or in private.

The actor is currently busy in doing film Kabir Singh promotions. This movie is a remake of Telugu film Arjun Reddy. Since, the release of the trailer the movie is buzz between audience the movie, Shahid is portraying the role of a  medical student who moves to the path of self-destruction when he is jilted in love.

It is said that for this role, he had to went through the physical transformation. For the look of college student he had to lose weight while for the look of an alcoholic he had to gain weight. Apart from this, the actor went on to smoke 20 cigarettes a day to nail the look.

The film is written and directed by Sandeep Vanga and is jointly produced by Cine1 Studios and T-Series. Apart, from Shahid in the male lead role, the actress Kiara Advani is playing the female lead role in the film. The movie Kabir Singh is slated to release in the theatres on June 21, 2019.

Talking about Shahid personal life, he is enjoying it with his wife and two adorable kids.