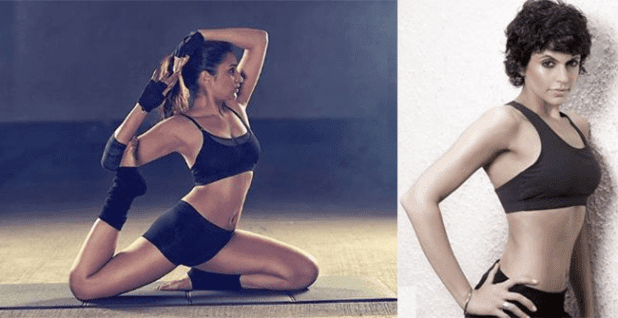 From Ministers to Bollywood celebrities, everyone spotted doing Yoga yesterday on fifth International Day of Yoga 2019. Celebs posted their pictures of doing aasans on social media. Actresses Mandira Bedi and Parineeti Chopra too joined band of celebrities to flaunt their fit bodies while doing yoga asanas.

Parineeti shared a picture of her nailing a yoga pose and showing off her stretching skills and she captioned the picture, “For flexibilty, strength and mental peace. I love yoga. InternationalYogaDay.”

She is seen in an all-black ensemble and looked stunning in yoga aasan. The actress dinned a black sheer sports bra and black gym mini shorts with black ankle supports and gloves. She tied her hair in a sleek ponytail and had no-makeup.

On the other hand, Mandira Bedi took to Instagram to share her yoga video with the caption, “Wishing a healthful year ahead to all on the occasion of internationalyogaday. day39 40daychallenge 2km run, 1 hour session of Yoga.”

She can be seen nailing a headstand, which is a part of her workout challenge. She wore a multi-coloured sports bra and black gym tights for her yoga session.

2019 marked as the fifth edition of Yoga Day, after UN General Assembly declared in December 2014 that June 21 would be observed as International Day of Yoga every year. Also, Prime Minister Narendra Modi led Yoga Day celebrations at a ground in Ranchialong with 40,000 others. Before starting the session, PM addressed the nation on the 5th International Day of Yoga and said that yoga is above all religion, caste, and society. “Yoga can play a huge role in tackling the issue and hence, this year’s theme is ‘Yoga for Heart’. We should make efforts to take yoga from cities to villages, tribal areas. Yoga is above region, above faith, above everything,” Modi said.

PM also urged people to make yoga a part of daily life, Modi said, “Peace and harmony are related to yoga. People across the world must practice it.”