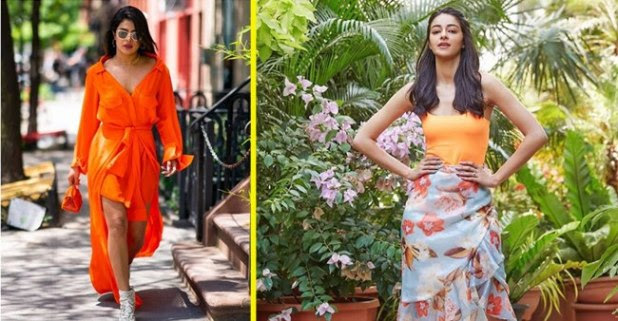 In the current monsoon time, celebrities have been choosing to wear orange outfits and giving us major fashion goals. It’s not just addicted to the Bollywood divas but also spread to Tollywood wherein Samantha Akkineni was spotted wearing an orange ensemble. If you are seeking to wear a perfect shade outfit then, just prefer wearing an orange outfit that befits an occasion.

Usually, the celebrities opt a specific shade based on the season. Here are some of the celebs like Ananya Panday, Alia Bhatt, Priyanka Chopra, Samantha Akkineni and others who are rocking in their respective orange attires. Priyanka Chopra was initially captured in the pictures donning this shade at the prestigious 72nd Cannes Film Festival Red Carpet 2019. Later, the actress shared a series of pictures on her social media account and stunned all her fans and followers.

Later, several Bollywood divas fell in love with this shade and started opting it for different occasions. This shade has gained global prominence as it makes the woman look like a bossy diva. The actress Ananya also loved this vibrant color and also tried out wearing a variety of shades in the family of orange. Check out some of the actresses who give us major fashion goals in orange shade outfits.

Priyanka Chopra, who has been spotting quite often alongside her husband Nick Jonas wore a trendy orange outfit and posted it on Instagram. Some of the fan pages of Priyanka Chopra also added the pictures of this popular actress donning a vibrant series of shades in orange dresses.

The debut actress Ananya Panday also stunned everyone by wearing an outfit that comes with an orange shade. In a light orange shaded outfit, the actress looks cute and bubbly. She even wore a highly bright orange outfit paired with black shade. The popular Tollywood actress Samantha Akkineni also wore a complete orange outfit and posed the camera.

Some other actresses who flaunted themselves in a variety of orange shades include Jacqueline Fernandez, Alia Bhatt, Disha Patani, Katrina Kaif, and others.