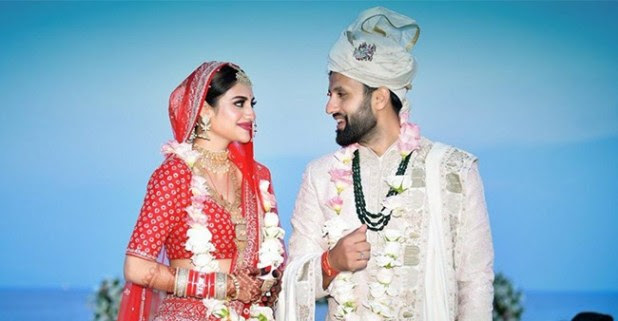 Bengali actor who elected as an law maker in the Lok Sabha election 2019 walked down the aisle in Turkey on Wednesday. Nusrat Jahan who is 29 years old married to businessman Nikhil Jain in the picturesque Turkish town of Bodrum.

Towards a happily ever after with Nikhil Jain ❤️ pic.twitter.com/yqo8xHqohj

Nusrat tweeted after the wedding, along with a photo of her and her groom. “Towards a happily ever after with Nikhil Jain,” she wrote.

Nusrat Jahan elected to be the member of Parliament from West Bengal’s Basirhat seat on a Trinamool Congress ticket by over 3.5 lakh votes. Nusrat is among the 17 women from Mamata Banerjee’s party who contest election in the April-May election.

I seek blessings from Allah to everyone for all who believe in humanity and love. Eid Mubarak ! pic.twitter.com/lyIx7PFr6E

For the wedding, she wore a red lehenga designed by Sabyasachi Mukherjee. Ace designer Sabyasachi designed the groom Nikhil’s outfit also. For another ceremony, Nusrat is believed to have chosen an outfit which is a mix of mint green and white. Nusrat’s family includes her parents, sister and other close relatives reached the destination on Sunday. Bengali actor Mimi Chakraborty who is a close friend of Ms Jahan also attended the wedding. Mimi  also a first-time Trinamool Congress lawmaker.

Both Mimi and Nusrat faced criticism last month for their choice of clothes to attend the parliament. The actresses turned law makers wore pants and tops which did not go down well. People said they were not “appropriately dressed” for attending parliament. Due to Jahan’s wedding, both the lawmaker couldn’t take their oath in the Lok Sabha.

Mimi also posted a glimpse of the stunning wedding venue on Instagram with the caption, “All set #njaffair”. The couple will throw a reception at a hotel in Kolkata on July 4 which is expected to be attended by Bengali film personalities and political leaders.

Nusrat’s groom is a Kolkata-based entrepreneur having a textile business. Nusrat was the face of his textile chain. “Never will we let go.”