Dance Deewane 2: Govinda makes an appearance, Madhuri posts a picture of them together 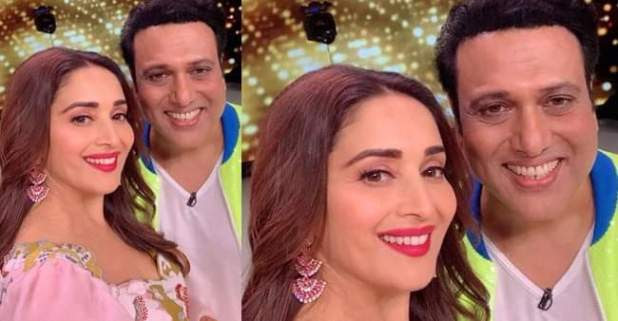 In films like Maha-Sangram, Paap Ka Ant, Bade Miyan Chote Miyan, and Izzatdaar, the on-screen chemistry of Govinda and Madhuri Dixit Nene was loved by everyone. Madhuri was last seen in Abhishek Varman’s Kalank and she has returned to television as a judge on the popular dance reality show Dance Deewane 2. It has been reported that Govinda is set to make an appearance on the show.

Madhuri recently took to her social media account to share a beautiful photo with the Hero No. 1 actor and captioned it as – “Govindaaa”. The actress looked amazing in a green embroidered cropped choli with a lehenga of the same colour and white dupatta.

According to a report, Govinda and Madhuri will be seen recreating the song titled Ek Rasgulla Kahin Phat Gaya Re from their 1990 film, Izzatdaar. If the same report is anything to go by, then the Partner actor will also recite his evergreen dialogue Intukle Pintukle from Deewana Mastana that released in 1997.

Along with Madhuri, the popular dance show is judged by Tushar Kalia and Shashank Khaitan and is hosted by the Ishq Mein Marjawan actor Arjun Bijlani. Reportedly, after the mind-blowing performance of Arsh in the upcoming episode, Madhuri will talk about an incident where her younger son stood for his elder brother. “Brothers may fight with each other but when required they will stand for each other like pillars and will go to any extend to protect each other. My sons were playing soccer in Denmark when in between the match a competent player pushed my elder son and he fell on the ground. Running to his rescue with protective instinct, my younger son went and scolded the boy and asked him to stay away from his brother and be mindful of his actions” Madhuri said.