Cute Banter Of Zain And Misha Will Brighten Your Day, Mom Mira Rajput Shares The Picture 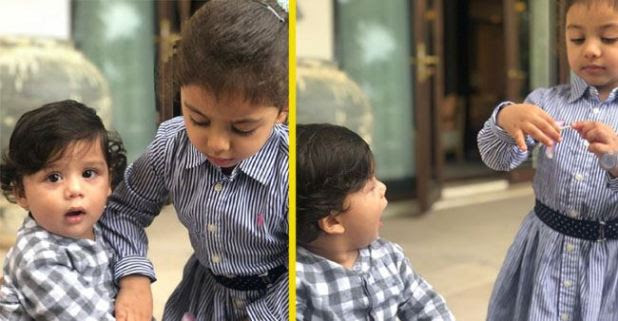 Shahid Kapoor and Mira Rajput embraced parenthood for the second time last year when Mira gave birth to a baby boy. They named their son Zain Kapoor. The couple has an elder daughter Misha Kapoor and they are completely hands on parents for their kids. Siblings Misha and Zain are the cutest kids of Bollywood without any doubt.

Just like Shahid, Mira too shares pictures of her kids on social media every now and then. Today, the yummy mummy posted yet another cute banter diaries between siblings Misha and Zaina and this will definitely lighten your mood. Her picture with caption reveals how Zain being the youngest and mischievous hit Misha playfully.

Daddy of two munchkins Shahid Kapoir is gearing up for the release of his film Kabir Singh and is already indulged in the promotion of the film. Kabir Singh stars Kaira Advani in the female lead and is all set to release this June. It is an official remake of Telugu movie Arjun Reddy. In the film, Shahid is playing the role of an obsessive lover. Seeing the trailer and look of of Shahid, it can say that the actor has got into the skin of character.

It is reported that Shahid was not the first choice of the makers to play the lead in the movie. Actor Arjun Kapoor was approached to play the role of Kabir Singh in the film. When Sandeep Vanga was asked about it, he has been quoted as saying, “Yeah, but before that Shahid and I were already in talks, so I couldn’t just jump to another actor. It is not about whose acting calibre is greater but about the commitment.” . The movie is jointly produced by Cine1 Studios and T-Series.