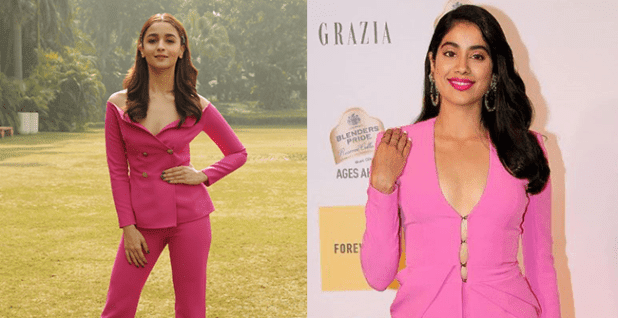 Pink is the most favorite colors for most of the girls. In every girl’s wardrobe, we may find these colored-outfits that usually dominate other colors. Women are highly obsessed with this shade of pink. In recent times, we have spotted Dhadak actress Janhvi Kapoor in an adorable pink suit. When we have seen her in such an outfit, people have reminded the outfit of Alia Bhatt.

During the promotions of her film Gully Boy featuring Ranveer Singh, we have witnessed Alia Bhatt in the Safiyaa suit. In the picture, we can find Alia wearing an off-shoulder top paired with matching parallel formal pants and double-breasted blazer. She enhanced her look with her hair keeping it wide open.

The Student of the Year actress stunned everyone with her make-up look, on-fleek highlighter and nude lips. Apart from her make-up, Alia Bhatt looks fabulous just like a fashionable chic. The Dhadak actress Janhvi Kapoor chose to wear a suit in millennial pink for the Grazia Millennial Awards 2019.

The actress wore a scorching blazer that comes with a plunging neckline paired with matching formal pants. Janhvi appears pretty cute in her pink outfit. With her wavy hair, old Hollywood look, dark pink lips, and tinted cheeks, the actress wrapped up her fashionista look. She augmented her look with crystallized hoop earrings.

This pink power suit has enhanced her look. People are truly having an immense crush over pink outfits. Janhvi and Alia will soon share the screen space together in the upcoming flick of Karan Johar i.e., Takht. Karan will be directing this film. It’s an epic periodic film featuring Anil Kapoor, Kareena Kapoor, Ranveer Singh, Vicky Kaushal, and Bhumi Pednekar.