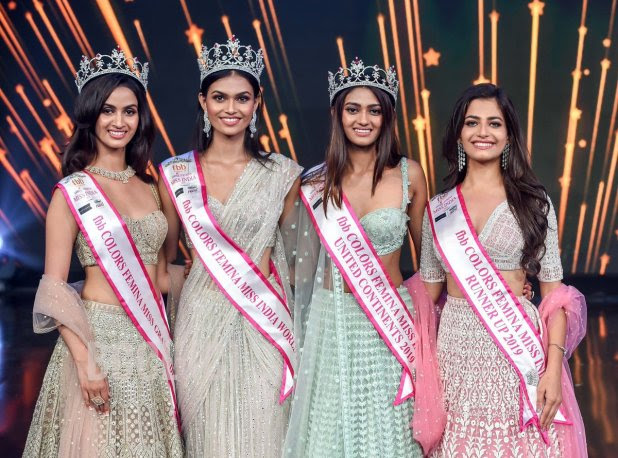 And the wait is finally over as to who will represent India in international pageant, here is Suman Rao, Miss India 2019 from the state Rajasthan. This year all the contestants and the pageant had received heavy criticism on social media. While introducing  all the contestants the pageant had released an image which faced a lot of backlash for similar appearance. But now that we have got our Miss India 2019 all is well. There were 30 beautiful women competing for the crown and representing their states. All the 30 contestants have to undergo intense training before they compete with eachother. And this hard work of over the months from working on their ramp walk to working extremely hard on their fitness and health brigs them the confidence and poise.

This was an emotional moment for Miss India 2018, Anukreethy Vas crowned her successor Suman Rao. Last year’s first runner up or Miss Grand India Meenakshi Chaudhary of Haryana also crowned her successor and so did Andhra Pradesh’s Shreya Rao Kamavarapu who was adjudged the second runner-up in 2018. She crowned Sanjana Vij from Telangana.

Many Bollywood stars had shown their presence in the finale of the Miss India pageant 2019. Katrina Kaif and Vicky Kaushal were seen performing on Bollywood’s hit dancing numbers. Katrina Kaif was just beautiful to watch on the stage.  The show was hosted by Bollywood’s favorite director/ producer, Karan Johar along with Manish Paul and Miss World 2017 Manushi Chhillar. Bollywood beauties, Huma Qureshi, Dia Mirza, Neha Dhupia and Chitrangada Singh were also seen gracing the event.