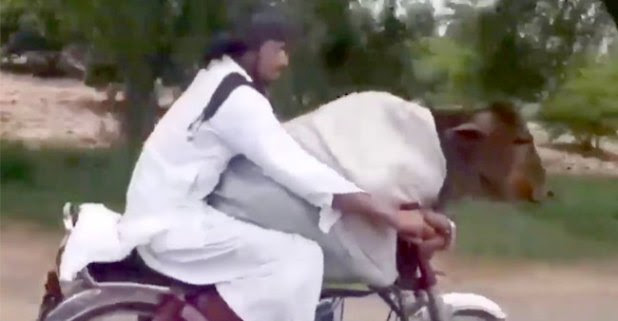 We usually come across some hilarious and bizarre videos on the internet. People even react to some things that are truly unusual. Here is a man from Pakistan who has become quite popular for his video that went viral on the internet. This man was spotted riding his motorbike alongside his cow sitting in front was captured and uploaded on the internet. Soon, the video went viral and people have started throwing their opinions about the video.

Here’s proof that almost anything is possible in Pakistan: pic.twitter.com/n2MgK3uyKE

From the video, we can witness a man making his cow sit in front of him on the bike and started riding the bike. One of the persons passing next to him started recording him and he said, ‘Kamaal. Yeh Pakistani jugaad hai, (Wow, this is a Pakistani hack).’ In this 54-second video clip, we can witness the bike rider smiling at the camera while the passerby complimented the cow for sitting calmly on the bike. It was tied up to its neck with a piece of fabric.

After becoming viral, people on Twitter started reacting to the video through their comments. One of the comments says, ‘This is illegal on so many counts! At the very least, driving laws and animal protections law!’ While some of them admired the cow for its calmness and some others have started mocking him towards his foolish act. Salman Siddiqui actually shared it on Twitter and wrote, ‘Here’s proof that almost anything is possible in Pakistan:’

Look at the reactions of the people on Twitter:

What a well behaved calf.

What a well behaved calf.

This is abuse. Feel bad for the animal. God bless it

This is abuse. Feel bad for the animal. God bless it

The animal is frightened… poor soul!! Humans are monsters!!

Extremely dangerous; no helmets for starters. The calf appears docile but one bit of panic could prove fatal. But I love it.