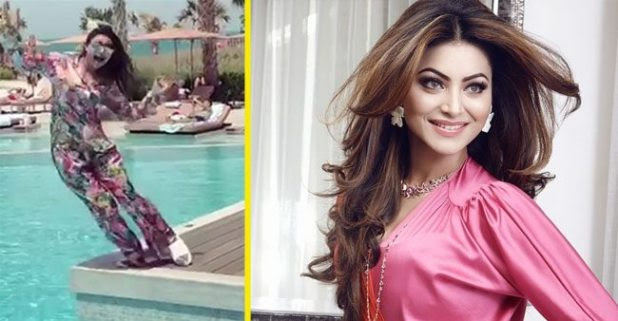 Urvashi Rautela may not have had a successful Bollywood career in terms of films however, she has nonetheless managed to garner a huge fanbase. She is considered among the hottest actresses in the industry and thus she has a loyal fanbase on social media. Urvashi keeps updating her feed on social media with pictures and videos and recently one of her videos has caused a lot of buzz.

The actress shared a video of herself on Instagram for which she has been severely trolled. Fans went as far as calling her latest post fake. The reason all this controversy is a video which Urvashi shared on her Insta profile a few days ago. In the video she was seen dancing near a swimming pool. However, after some time, she slipped and fell into the pool. This whole incident was captured and Urvashi herself shared it on social media.

Urvashi wrote in the caption, “Haters will say that it was planned. Either way, I enjoyed my Sunday.”

However, fans did not entirely enjoy the video and deemed it fake. Others trolled Urvashi and created memes related to the video. Some others said that the entire incident was pre-planned rather than what appears as spontaneous in the post.

While some people started making fun of Urvashi by posting derogatory comments on her post, and some went so far to say that Urvashi does not know how to act and because of her fake acting Urvashi’s movies have not been successful.

Urvashi made her Bollywood debut in Singh Sahab the Great, 2013, and later acted in movies such as Sanam Re, 2016, Great Grand Masti, 2016, Hate Story 4, which released last year. Up next the model turned actress will be seen in ‘Pagalpanti’ alongside John Abraham, Anil Kapoor, Arshad Warsi, Ileana D Cruz.