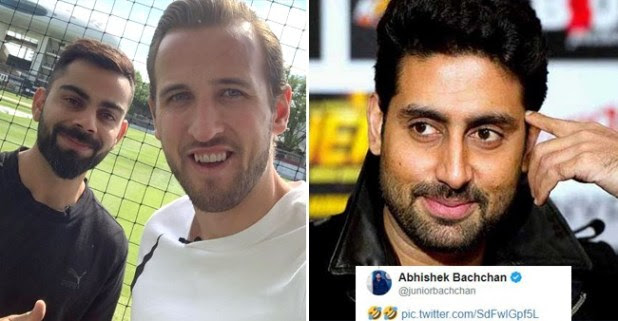 We all know that Virat Kohli and the Indian Cricket Team are currently in England for the 12 edition of ICC Cricket World Cup. The star recently posed for a picture with Tottenham Hotspur star Harry Kane, who is also the captain of England national team at the Lord’s Cricket Ground.  The English star posted the picture with Kohli on Twitter and wrote, “After a few tweets in the last couple of years good to finally meet @imVkohli. A great guy and a brilliant sportsman.”

It was a pleasure meeting you @HKane and all the best for the finals.

Virat Kohli also posted the same picture on his social media handles and wrote, “It was a pleasure meeting you @HKane and all the best for the finals.”

As soon as the picture was shared, fans were excited as the two legends posed together in a frame. But, it was Abhishek Bachchan who stole the spotlight by trolling the Indian Cricket Team’s captain.

Back in 2014, Kohli posted the same picture on his Facebook profile, and showed his love towards the English football club. But, Kohli has been doing this for quite some time now. He also posed with Southampton striker Danny Ings where they were holding a Saints jersey last year in September. The picture was tweeted by the club’s official Twitter handle and fans enjoyed the moment too.

It was great to welcome @imVkohli and @BCCI to Southampton last week!

Virat Kohli is currently on a national duty to represent the Indian Cricket Team at the ICC Cricket World Cup 2019.