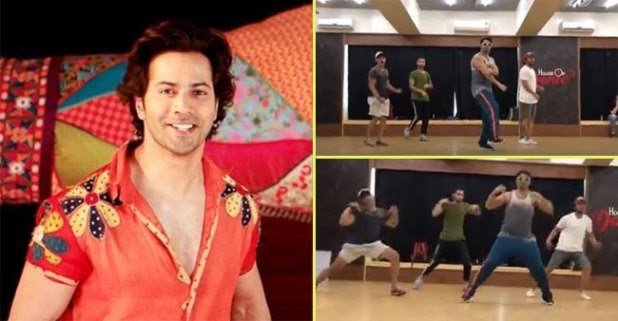 Bollywood actor & son of David Dhawan, Varun Dhawan is a stellar actor in the entertainment industry. He is one among a famous actor who has made his place in the hearts of audience with his brilliant acting skills. He has done numerous movies like drama Student of the Year, Humpty Sharma Ki Dulhania (2014); the dance film ABCD 2 (2015); and the action comedies Dilwale (2015) and Judwaa 2(2017), October and many others. His some of the film’s did very well at the Box office. The phenomenal actor is recently busy with the much-awaited film Street Dancer 3D, that will mark Varun and Remo D’Souza’s second on-screen collaboration.

On his Instagram account, he shared a video one job he can be seen dancing along with his co-stars. In the video, it can be seen that be is preparing well for the movie. The actor also revealed that he completed the entire dance sequence within 17 seconds. The actor captioned his post, “17 seconds mein itna naacha Sd3 NEWSCHOOL .”

Have a look at the video below:

On social media Varun on regular bases have been sharing updates from the film shoot. As per reports, Varun had  also injured himself while he was trying to perfect a step. Varun also shared a video on Instagram in which he is seen practicing back flips.  Varun had shared a video & captioned his post, “#3prep #streetdancer3d #nodaysoff @kuldeepshashi @flyzonefitness. My whole body hurts.”

Varun Dhawan will be seen in this movie along with stars Prabhu Deva, Nora Fatehi, Shakti Mohan and Aparshakti Khurana in vital roles. The film is produced by Bhushan Kumar, Lizelle D’Souza and Krishan Kumar and it  is scheduled to get release on November 8.

The actor was last seen in Film Kalank this year. The movie was a multi starrer which featured Alia Bhatt, Aditya Roy Kapur, Sonakshi Sinha, Sanjay Dutt, Madhuri Dixit. However, the movie didn’t do well at the Box office as per expected & it literally disappointed the viewers.