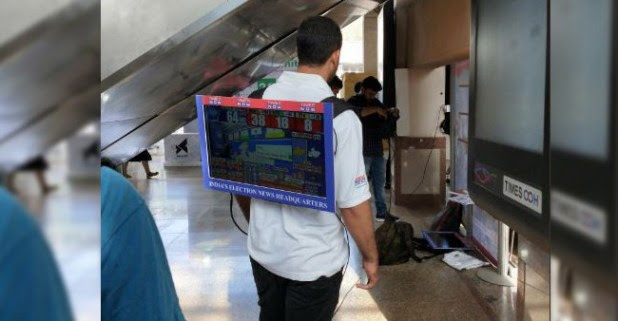 The much-anticipated day of the month has finally arrived i.e., the elections result day.  On 23rd May 2019, the Election Commission has scheduled to declare the results of Lok Sabha Elections 2019. We all know that people across different states of India have cast their valuable vote to their preferred leaders in the months of April and May.

After completing different phases of elections, the Election Commission is currently counting the votes across different locations. All the excited people have already hooked themselves to the big screens and small screens to know the result. It is quite common that we come across some bizarre things during the day of the election result.

This is what I came across today at a Metro station in Mumbai! #ElectionResults2019 pic.twitter.com/6mTTjukcec

One of the Twitter users added a picture of a man moving around with an LCD screen holding on his back. The LCD screen displaying the election results. This particular incident took place at the Mumbai Railway Station. One can check out the picture of the man holding an LCD Screen on his back. Jesal Sampat posted this picture and wrote, ‘This is what I came across today at a Metro station in Mumbai! #ElectionResults2019.’

After looking at the post, a user commented on the post by writing, ”the man runs the risk of being electrocuted.’ The comment further reads, ‘such stunts are unnecessary as most people have phones to check results.’

As per the latest reports, BJP is leading in the Lok Sabha Elections and everyone is speculating that BJP would soon make its comeback into the power. Rajnath Singh, the Union Home Minister thanked all the citizens of India for providing one more chance to the BJP-led NDA keeping faith in Modi’s leadership.

He wrote, ‘This historic victory in general elections is the outcome of Modi’s visionary leadership, Amit Shah’s dynamism. PM Narendra Modi is now all set to build New India.’ The mother of Narendra Modi, Heeraben whose age is 98 thanked all the BJP party leaders outside her residence in Gandhinagar. This year, the Election Commission has witnessed the highest percentage of voting in the country.