Unseen Pictures of Sonam Kapoor and Anand Ahuja on their First Wedding Anniversary, Showers of Blessing by Family Members 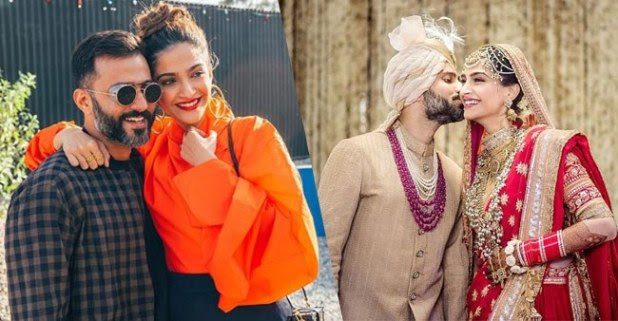 The gorgeous actress Sonam Kapoor recently celebrated her first wedding anniversary with her loving hubby Anand Ahuja. It’s been a year since they tied a knot together on 8th May 2018. On the occasion of their anniversary, the couple spent their best time with their family members. They celebrated the ceremony with Anil Kapoor, Sister Rhea, mother Sunita and some other family members of the couple.

The actress expressed her gratitude to each and every member of her family who wished them on a special occasion. Anil Kapoor posted a picture of the couple and captioned it as, ‘It’s been such a fantastic year for you both, and if it’s any indication of the life to come, you have so much love, happiness, success (and shoes) to look forward to! Happy Anniversary @anandahuja @sonamkapoor! Love you both! Keep making #everydayphenomenal.’

Sunita Kapoor, the mother of Sonam posted the couple picture and wrote, ‘Happy happy anniversary ♥️♥️♥️♥️ Love is not about how many days, months , or years you have been together. Love is about how much you love each other every single day.’ Adding to the caption, she placed more than a dozen heart emojis.

Her sister Rhea Kapoor also got a wonderful message on their first wedding anniversary. She wrote, ‘Happy anniversary family!!!!! I love you both more than hot sauce.