These divas proves that if you have talent, size doesn’t matter! 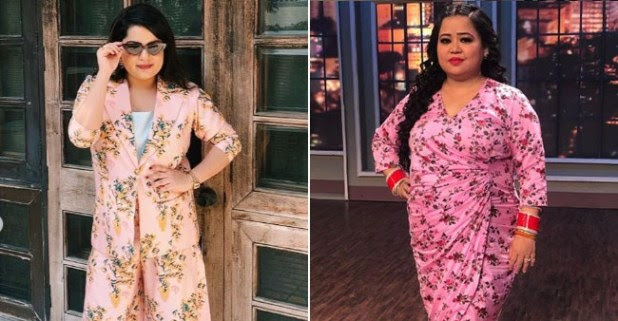 When we talk about the glamorous industry Bollywood, the first thing that pops in our mind is celebs. The divas and handsome hunks who are look great , have great body and their appearance is on point.  When we are talking about B-TOWN we see pictures of divas in  zero figure or shaped body . Right? There is also thinking of some people that only they people who possess great body can enter in the entertainment industry. But, this is not so as today we have lot of celebs in the tinsel town who have broken the stereotype s and have made their valuable place here. These beauties are loved by their fans and have huge fan following as well. They prove that if you have talent then size don’t matter. Who are they?? Have a read below:

Bharti Singh is the Queen of comedy in the industry. With her comedy, she has gained huge popularity. Apart from making people laugh, she is also seen acting in various platforms. She has done reality shows like  ‘Jhalak Dikh Laja’. Bharti participated as a contestant in a TV reality show, ‘Khatron Ke Khiladi’.

The younger daughter of Vinod Dua is an Indian actress, comedian and writer. She has done acting in  web series like ‘Girlyapa’ and ‘The Trip’. She was also seen in Saket Chaudhary’s Hindi Medium sharing screen space with Irrfan Khan in 2017. She was one of the three mentors along with Zakir Khan and Hussain Dalal for the fifth season of The Great Indian Laughter Challenge which is judged by the actor Akshay Kumar. She is quiet active on social media.

The actress has worked in Television as well as Bollywood industry. She was seen in film ‘Kal ho na ho’ and even participated as a contestant in one of the season of Bigg Boss. While talking about her figure she once said  “From walking for Shaina NC to a recent ramp walk for a plus-size fashion brand, I’ve done it all with confidence. When people look at me I want them to see a strong confident fat women who is doing all the things that they sort of associate with thin women. Yes, I am a plus size and I can walk the ramp. I am a plus size and I can rock almost all the fashion trends.”

The actress was seen in serial  ‘Pyaar Kii Ye Ek Kahani’. She once said “Individuality and having your own identity is very important.”

The actress is one among the plus size divas. She was quoted saying  “I have to agree that there was a time when I thought – haye main toh bahut moti hoon (oh! I am very fat). When I was doing theatre, many people would come to me and say you’re so pretty but I wish you’d lose some weight. That irked me. Then I thought- But this is who I am! Why can’t you like me this way?”.