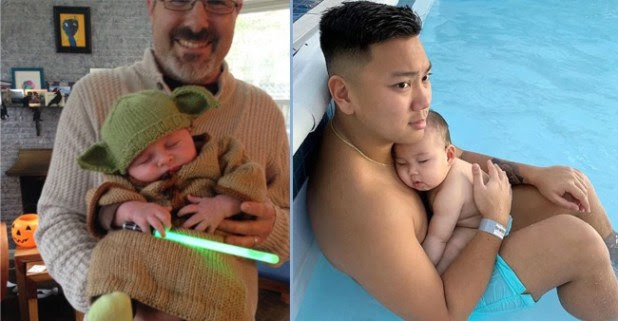 Having a baby is one of the greatest feeling in the world. All those couple who got to know that they are going to be parents feel very lucky as they will see the part of themselves in their new born. It is a also said that kids complete women who give them abundance of love. Parents take care of their children by sacrificing their sleep, time and wishes too so that their children get everything best in this whole world.

After the birth of the baby, the little munchkins filled the life of a couple with joy and love. The adorable kids bring smile on their parents face. Newborns are photogenic as they look great in every picture they get captured. Parents and their dear ones also wish to have a cute photograph with a little one. However, there are times when the candid pictures are taken & in that real moments are captured.

Today, we have complied some of the photographs of babies with their daddy. These father’s who are spending quality time with their kids look really adorable. In the photo, you will find little ones smiling, yawning, sleeping & doing other stuffs.

Have a look at the cute pictures below:

After an hour of “swimming” in the pool pic.twitter.com/hDfRdUE54Q

He still likes to sleep like this with his feet touching me. pic.twitter.com/O9cxLDR9p7

Our favorite past time. ❤️🥰 pic.twitter.com/IPsfRPpm7Y

I’ll join this amazing damn thread! Here’s me and my Mini Queen Zennie
When she was first born.. and now this is her when she wake up lol pic.twitter.com/8ZxQ6MxWMD