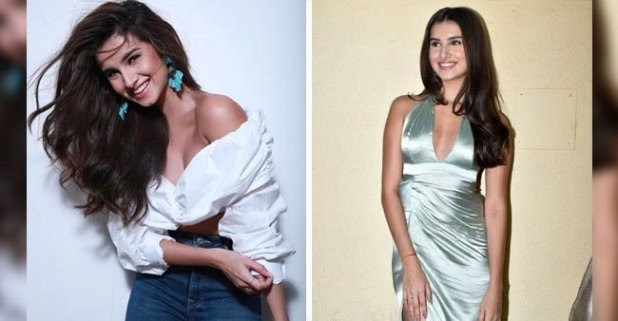 Tara Sutaria, the gorgeous actress of Bollywood film industry has become the hot topic of the discussion for her acting in the film ‘Student of the Year 2.’ The actors such as Tiger Shroff, Ananya Panday, and Tara Sutaria are featured in this film. Among the entire cast, Ananya is the new face in the film that made her debut in the industry.

Tara Sutaria has incredible fashion sense. We have seen in a plethora of outfits that include short skirts, crop top outfits, sharara, and quirky T-shirts. As of now, the movie of Tara released recently and now, she is currently shooting for her next project. With her outstanding fashion sense, she often makes an impact on the people. In recent times, the actress spotted with her co-actors at the special screening of Student of the Year 2 film.

The actress looked stunningly beautiful in her bold mint green outfit. With her impressive look, she had already grabbed the attention of those who attended the premiere show. Later, the actor wore a silk mint green outfit that comes with a neckline and paired with a wrap-around silhouette alongside a thigh-high split. The actress wrapped up her outfit by wearing a pair of transparent strappy heels. She looks super gorgeous without adding any kind of accessories or jewelry.

The actress has done perfect hair-do with a middle partition. She maintained a complete fashionable chic look with nude lips on her rosy make-up. During her promotions for her film SOTY 2, the actress made her appearances in public in an exceptional manner. Just take a quick glance at the trendy look of the actresses from these 5 promotion pictures of Tara Sutaria.

The actress is quite happy after the release of her debut film SOTY 2 across various theatres. Currently, the actress is acting in her next project ‘Marjaavan’. She plays the role of Zoya in this film. The filmmakers haven’t scheduled the release date of this film.