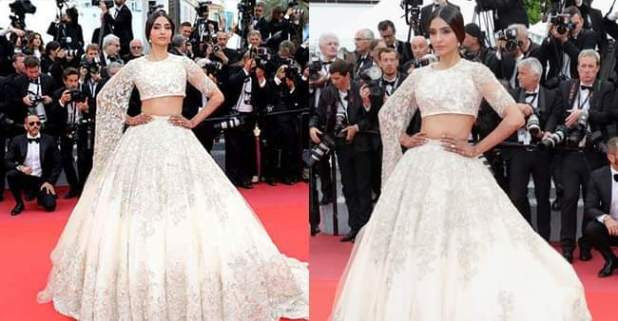 Cannes Film Festival is currently going in Palais des Festivals, Cannes, France, and just like fans, celebrities have been doing a lot to prepare for the mega event. Sonam Kapoor, who has been a constant visitor at Cannes, is known for setting different fashion trends. The actress recently celebrated her first marriage anniversary with husband, Anand Ahuja. Sonam took over the red carpet of Cannes and her nutritionist has revealed the hard work the actress did to prepare herself for the event.

According to FilmFare.com, the nutritionist said that the actress goes on a strict diet just a month before the festival is about to begin. It helps her in getting into desired shape. Karle also talked about the actress’ look and said, “Red carpet outings involve high slit gowns and backless outfits, so we keep the leg work though. There is as much emphasis on upper body workout because one needs to have a toned back to flaunt those dresses. I train with her and we work out on a combo trailer, which is a pilates machine and some traditional mat pilates routines in the mornings. Her evenings are dedicated to weight training and cardio. It involves interval training where she walks for a minute and then jogs. She picked up spinning when she was in Los Angeles recently and continues to do that as well.”

Talking about the diet, the nutritionist said that the actress loves to eat homemade food and enjoys special Keto chocolate. Other than this, she follows a light vegetarian diet including a lot of fluids and coconut water. She also takes broken down protein during workouts. It was also revealed that the actress has come a long way and now doesn’t cheat on her meals. Good work, Sonam!