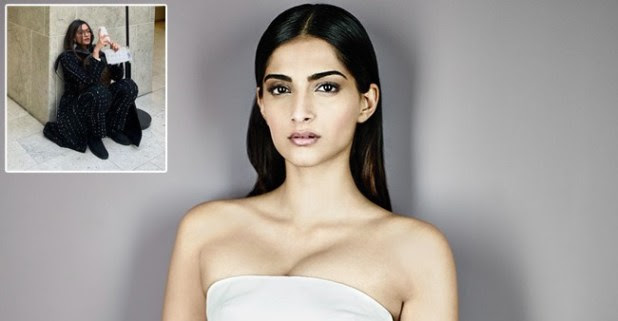 Actress Sonam Kapoor & daughter of Anil Kapoor is one of the stellar actress in the entertainment industry. Apart from acting she also has a great sense of styling. Sonam has shattered stereotypes by becoming a fashion trend setter in B-Town. Her bold & unique fashion choices inspires us as she carries every outfit like a pro. Indeed she is flawless beauty. Sonam along with her sister & producer Rhea Kapoor runs a clothing chain called ‘Rheason’ which is quite a popular brand.

On social media account of the actress you can find adorable pictures of her as she enjoys visiting different places in the world along with her husband Anand Ahuja. Recently, she has posted a photo with her hubby that is taken in one of the museum in Amsterdam. She captioned the photograph & wrote “Museums are my happy place. Art is my happiness. And the person taking this picture is my ultimate joy. (And his name means happiness/joy) guess who it is! flashbackfriday.” Have a glimpse of the photo below:

Isn’t the couple looking awwdorable. You can find may more cute pictures of Sonam & Anand on her Instagram account. Their photographs are not only the sweetest thing you will see today but also give major couple goals to many.

Sonam Kapoor was last seen acting in  Shelly Chopra’s Ek Ladki Ko Dekha Toh Aisa Laga. The film also featured her father& actor Anil Kapoor,  Rajkummar Rao and Juhi Chawla. Although Sonam was appreciated for her role , the film couldn’t to very well at Box office as per expected. Now, Sonam will next be seen sharing screen space with Dulquer Salmaan in the movie The Zoya Factor which is directed by Abhishek Sharma. The film is an adaptation of the book written under the same name.