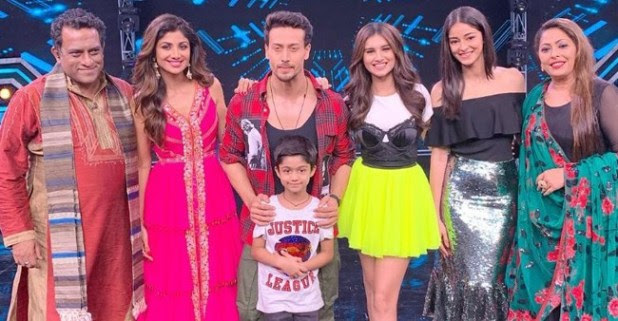 The episode in which celebs will appear on the show will also see Shilpa Shetty’s son Viaan Raj Kundra who comes to meet his idol Tiger Shroff. Viaan is a big fan of Tiger, so reaches on the set of the dance reality show. He also performed on a dance number and impressed everyone.

Mommy of Viaan took to her Instagram account and shared a picture of the entire team with the film stars. Shilpa also mentioned how Viaan bunked his school to meet Tiger.

She captioned the picture as, “What an amazing day it’s been, shot such an exciting episode for super dancer with tiger jackie shroff ananya panday tara sutaria these students from soty2 and ( a student who bunked school) my little star viaan raj kundra who showed off his antics proudly to his idol tiger shroff ..My heart swelled with pride. Now I know the feeling of those parents seeing their children perform on that stage! What a day!.”

As Viaan’s mother is a famous actor, so her son is till trying to wrap his head around the fact. “As a child, Viaan has no sense of why people are coming to take pictures of me. He still doesn’t know the concept of being popular and famous. I can see that he has now gradually started to get his head around it. Now he is like, ‘mama you are famous’,” said Shilpa.

Viaan often asks her why other children at his school call her by her name Shilpa Shetty. “Whenever he sees me on the television, he knows that I am famous. His friends call me Shilpa Shetty and he often gets curious and asks, ‘why do they call you Shilpa Shetty?’. It’s wonderful to interact with children. They come up the most interesting questions,” said Shilpa.