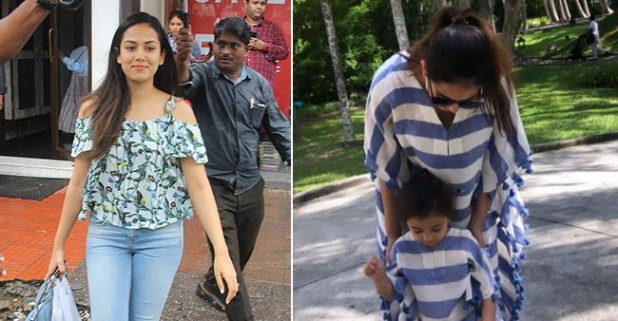 Shahid Kapoor and Mira Rajput are one of the best couples in Bollywood giving us perfect couple goals. Whenever the film actors get free time, the Bollywood celebs will spend the best time with their family members flying off to vacations. Shahid Kapoor, the popular Bollywood actor went on for a vacation alongside his wife Mira Rajput and kids Misha and Zain. They went to Phuket. Earlier, the couple went to Singapore to launch his wax statue at Madame Tussauds.

Later, they went on for a vacation with their cute little kids. As we all know that Mira is quite active on her social media account sharing their memorable moments with her fans. In recent times, the actress shared the pictures with her hubby, Misha, and Zain. From one of the pictures, we can see Misha twinning her mother Mira in a white and blue striped Kaftan outfit. From the next picture, we can see Misha sitting next to her mom on her bicycle and Shahid Kapoor was seen riding another bicycle ahead of them. Mira then captioned her picture as, ‘Monkey on my back.’ Ishaan Khatter, the brother of Shahid Kapoor commented on the picture with a lot of heart emojis.

We can even see Shahid Kapoor riding a bicycle with his son sitting in the back seat. Some of the fans and followers of the couple commented on these pictures. They wrote, ‘Subah subah Cycle ki sair (Early morning cycle ride)’, ‘Most beautiful family’ and ‘Lovely couple with lovely family’.

Speaking about the professional front, Shahid Kapoor is currently waiting for the release of his upcoming film, Kabir Singh. The film features Kiara Advani and Shahid Kapoor in lead roles. Kabir Singh is an official remake to the Tollywood blockbuster film ‘Arjun Reddy’ featuring Vijay Devarakonda. In this film, Shahid Kapoor will be seen in the titular role.

The original film and the remake is being directed by Sandeep Reddy Vanga. Bhushan Kumar, Murad Khetani, Krishan Kumar and Ashwin Varde are the producers of the film. The filmmakers have scheduled to release the film on 21st June 2019.