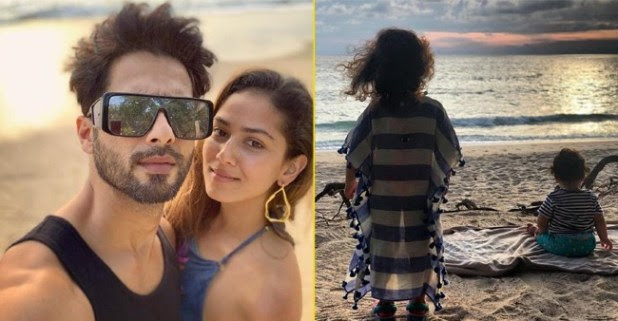 Shahid and Mira Rajput is one of the best pairs in the Bollywood film industry. This couple often oozes out giving us major couple goals. Even if his wife Mira isn’t a film person, she has grabbed millions of hearts with her presence in Shahid’s life as a wife. In recent times, the couple went off on a vacation alongside their kids Misha and Zain to Thailand.

One can check out the fun-filled pictures of the couple and their kids near the beach, riding on a bicycle and much more memorable moments from the summer trip. Before the release of his film Kabir Singh, Shahid Kapoor went out for a vacation in Thailand. They reached Phuket and enjoyed themselves to the peaks. Mira Rajput who is an active person on social media shared a series of pictures from their vacation.

We can look out the mother and the kid twinning in blue striped outfits and enjoying their bicycle ride alongside their kids. She took her official Instagramto handle to share the most adorable pictures of Misha and Zain with her fans and followers. From the pictures, we can witness the kids looking at the sea in the sunset near the beach. They had enjoyed a lot near the beach during the sunset.

Mira and Misha looked twinning in blue and white striped outfits in their trip. Mira shared her no make-up selfie with her fans. On the streets of Phuket, we can witness the lovebirds Shahid Kapoor and Mira Rajput Kapoor riding a bicycle alongside their kids Misha and Zain sitting in the back seat. How many of you loved watching the pictures of this family? Drop your thoughts about their vacation pictures in the comments section.