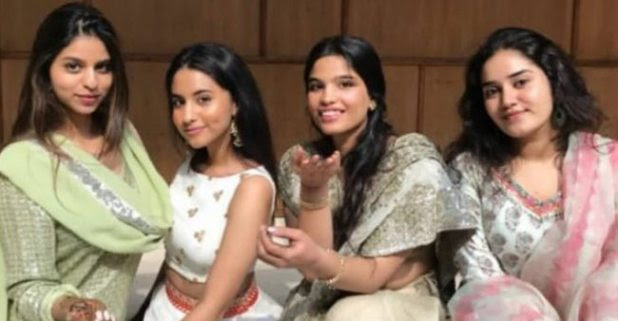 Suhana Khan, the daughter of Shah Rukh Khan is the star kid in the industry who is yet to make her debut in Bollywood. All the fans are highly anticipating to see Suhana on the silver screen. She is truly active on the internet often updating her pictures and videos on social media. Suhana has already grabbed the attention of the public with her frequently updated fashionable pictures.

In recent times, the actress attended the wedding ceremony of her cousin. The pictures of Suhana alongside her friends and cousins are currently doing rounds on the internet. It’s the wedding of Gauri Khan’s niece Alia Chhiba [daughter of Vikrant Chhiba]. From the pictures, we can witness Suhana taking part in the Mehendi ceremony of Alia.

The star kid looked graceful in a pale green salwar Kameez. We can witness Suhana just left her hair loose and wore big earrings paired with a simple chain around her neck. We can even watch the video of the Mehendi ceremony while Suhana was seen in mehendi. From the next picture, we can see Suhana in a dull green embroidered lehenga choli. Currently, Suhana is pursuing her education in London.

Earlier, Suhana attended the birthday party of her friend Athena and her pictures soon went viral across the internet. She looked like a diva in a bold white outfit. Shah Rukh Khan is very particular about the education of his kids. That’s the reason he hadn’t made any official announcement regarding the debut of Suhana in Bollywood. As per the reports, Suhana is quite interested in acting just like her father.

On the other hand, Aryan has some other plans for his career. SRK once said, ‘Neither Aryan nor Suhana has been groomed to be actors. She will go to an educational institute for three-four years to train in acting. Gauri and I never told our kids that they have to grow up to be actors. People around would say handsome hai, tall hai, body achcha hai, but if looks were a criterion, I’d never have been an actor.’