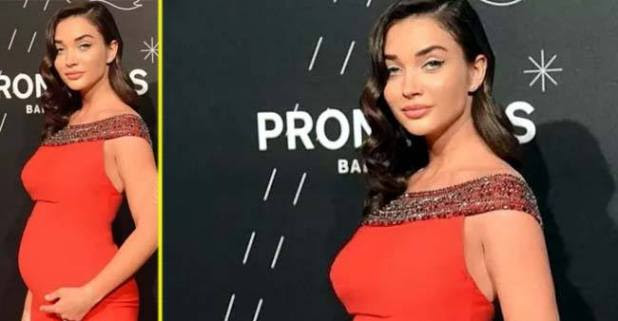 Actress Amy Jackson is one of the beautiful and talented one in the Bollywood industry. The British beauty is engaged to businessman George Panayiotou who is a hotelier and owns a chain of hotels. Amy on her Instagram account recent shared a picture through which she announced that she is pregnant and the couple is expecting their first child. She captioned the photo and wrote “I’ve been waiting to shout it from the roof tops, and today, being Mother’s Day, it couldn’t be a more perfect time… I already love you more than anything in this world, the purest most honest love. We can’t wait to meet you our little Libra one”.

After the declaration of her pregnancy she has been posting pictures of her flaunting her baby bump and how excited she is to see her new born. She recently posted a photo of her from a event. She captioned the photo“What a spectacular Pronovias Fashion Show Congratulations Amandine and the entire pronovias team.”

The glow on the face of mommy to be is radiant and she is looking more beautiful nowadays. There were speculation going on that the couple is planning to do a Greek wedding in year 2020. However, till now there is no official declaration by the couple. She made her debut into movies with director A L Vijay’s Tamil period-drama Madrasapattinam in 2010. She has done numerous films and even gave hitfilms in Tamil, Hindi, Telugu and Kannada languages. The actress was seen acting in  Ekk Deewana Tha opposite to Prateek Babbar, in Singh is bling she and  recently she was seen  in megastar Rajinikanth and Akshay Kumar starrer ‘2.0’. She also acted in ‘The Villain’—a Kannada venture.

Amy Jackson also got famous as she played a role of  the Saturn Girl on the third season of The CW’s superhero series, Supergirl. As she is currently pregnant, she has taken no new films or projects and his enjoying her maternity period.