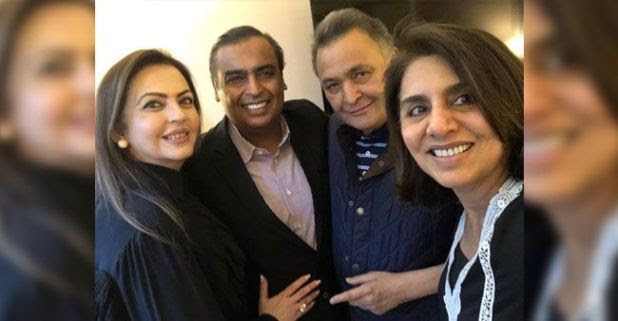 Recently, loving and renowned pair Mukesh Ambani and Nita Ambani paid a visit to ace star Rishi Kapoor in New York, who has been undergoing treatment for cancer.

The super star has been staying in the city of New York for last eight months. The actor, who is a social media buff, posted couple of images on Twitter thanking the Amabanis’ for dropping by them.

Thank you for seeing us Mukesh and Neeta. We also love you. pic.twitter.com/bYzi5Bt9N5

In the images posted by Ranbir’s dad, all four of them including Mukesh Ambani, Nita Ambani , Neetu Kapoor and Rishi Kapoor can be witnessed and the other image has two biggies Mukesh Ambani with Rishi Kapoor.

Rishi shared a pic and captioned it, “Thank you for seeing us Mukesh and Nita. We also love you.”

Neetu captioned the post, “Some pple just come to give you Assurance n Mental peace !!! Thank you mr and mrs Ambani for all the support   #love #grateful”

Thank you for all the love you showered. pic.twitter.com/PAIpW4cgez

In the meantime, as the veteran star shared the second image of him and well known personality Mukesh Ambani, he wrote: “Thank you for all the love you showered.”

Other stars who visited Rishi Kapoor in New York beforehand comprise King Khan, Deepika Padukone and Vicky Kaushal. His wifey Neetu Kapoor has been staying in NY with the super star since the beginning.

Pleased with the special visit of King Khan, Neetu on her Instagram account made a special post, “To make pple feel good about themselves is a rare quality!!! Shahrukh is all of that his love care is so so genuine !!! besides his amazing work I admire him as a very good and a real human being.”