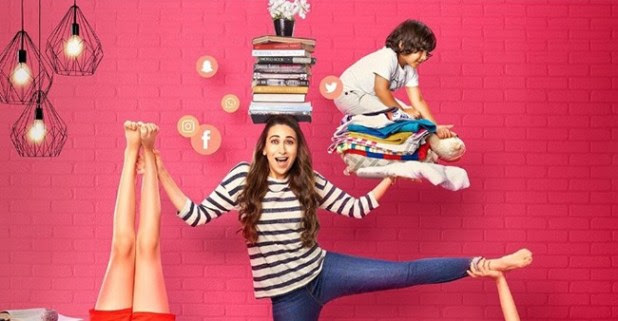 With the digital streaming platforms staking their claim in India these days, Bollywood celebs are also moving to establish themselves on the digital media. Karisma Kapoor is the latest entrant into this field, as she’s all but set to make her comeback with Ekta Kapoor’s parenting show ‘Mentalhood‘.

The 44-year-old actor shared several posters from the show which just signifies her character as a mother. The poster also witnesses a vibrant, classy and mom’s chaotic mess in the background. “Being a mom is a full-time job that you cannot clock out of. But it’s my favorite thing in the entire world! Every day is a new lesson, a new challenge. And we’re always learning and working at it. So more power to all moms out there! Come accompany me on this mental ride,” Karisma captioned the post.

Balancing herself on one leg along with books piled on her head, Karisma who portrays the role of a mother can be seen performing multitasks. In the second poster, the versatile actor introduced the looks of all the “gang moms” and even a single father. “Meet our gang of moms, which even includes a single dad It’s been super fun working with this talented bunch!” she wrote.

In the pictures, the viewers can catch a glimpse of the “gang moms” which includes Sandhya Mridul, Tillotama Shome, Shilpa Shukla, Shruti Hasan and not to miss a single father Dino Morea. With every picture telling its own tale, the viewers might witness stories based on the upbringing challenges faced by the parents today.

Katrina Kaif was quick enough to express her excitement over the show as she shared the look poster on her Instagram and wrote, “Watch out for this show from the most talented director Karishma Kohli….. Super excited to see.”

The series is directed by Karishma Kohli under the banner of Balaji Telefilms. Meanwhile, Karisma did a cameo in the film ‘Zero’ starring Shah Rukh Khan and Anushka Sharma as the leads.