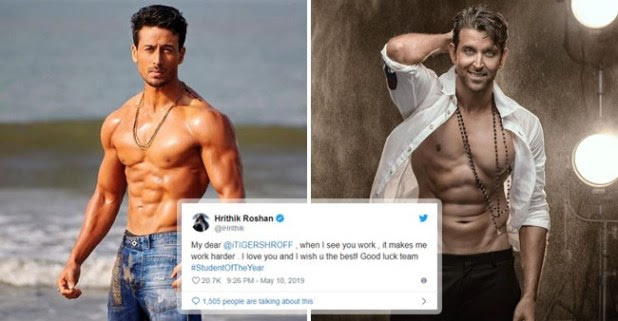 Tiger Shroff, the popular Bollywood actor recently acted in the film ‘Student of the Year 2, the sequel to the original SOTY. On 10th May, the filmmakers have released the film across different theatres. The much-anticipated film finally hit the theatres. The film features Tiger Shroff, Ananya Panday, Aditya Seal and Tara Sutaria in the lead roles.

Soon after the release of the film, it received mixed reviews from the audience and the movie critics. For his outstanding performance, Tiger Shroff received admiration from the fans and other audience. People were highly impressed with the outstanding dance moves and flying kicks of the actor.

My dear @iTIGERSHROFF , when I see you work , it makes me work harder . I love you and I wish u the best! Good luck team #StudentOfTheYear

Hrithik Roshan recently posted a love-filled tweet on his official Twitter account praising Tiger for his acting. He wrote the tweet as, ‘My dear @iTIGERSHROFF, when I see your work, it makes me work harder. I love you and I wish u the best! Good luck team #StudentOfTheYear.’

Thank you so much sir! But it truly is the other way around! ❤

To the tweet of Hrithik Roshan, Tiger Shroff responded and wrote, ‘Thank you so much, sir! But it truly is the other way around! @iHrithik.’ For the uninitiated, Tiger Shroff and Hrithik Roshan are currently working for their next project i.e., the yet-to-be-named film.

Siddharth Anand is the producer of this film under the production of Yash Raj Films. This film is based on both the action and dance concept. This movie features Vaani Kapoor and the film is slated to release on 2nd October 2019 i.e., on Gandhi Jayanti.

In the original series, Alia Bhatt, Sidharth Malhotra, and Varun Dhawan made their debut into the industry. Dharma Productions and Fox Star Studios jointly bankrolled the film Student of the Year 2 which was originally released on 10th May 2019.