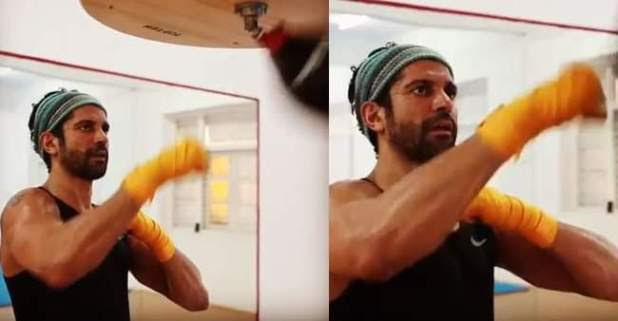 Farhan Akhtar always seizes the spotlight when he posts any update on his social media handles. He shared a video recently and like always, it was able to grab the attention of people. It garnered more than 50,000 views in an hour. The video was regarding his next project. The actor is coming back with Rakeysh Omprakash Mehra for his next film, Toofan. They both have worked together on superhit film, Bhaag Milkha Bhaag.

The actor is currently preparing himself for the role as the film revolves around the life of a boxer. The video that Farhan shared on Instagram showed his preparations. He is seen hitting punches at the right areas in an intense manner. Farhan captioned the video by writing, “Getting there. A day at a time. #ToofanInTheMaking #fitnesslife #skillset #speedball #painorpleasure #keepgoing #boxerlife.” Earlier, when Akhtar announced the film on Twitter, he wrote, ‘the film will be a ‘heartfelt story of a boxer.’”

The film is expected to hit the theatres by the end of this year. While taking about the film Rakeysh Omprakash Mehra said, “Anjum Rajabali has written this very endearing love story of a boxer, it’s not a real life figure but a fictitious character. What I liked the most about it (the story) was that it has a new voice. It’s set among the lower middle class. Boxing is not a rich man’s sport, anywhere in the world.”

We all are eagerly waiting for the film because we know Farhan has the ability to deliver the best performance of his life.