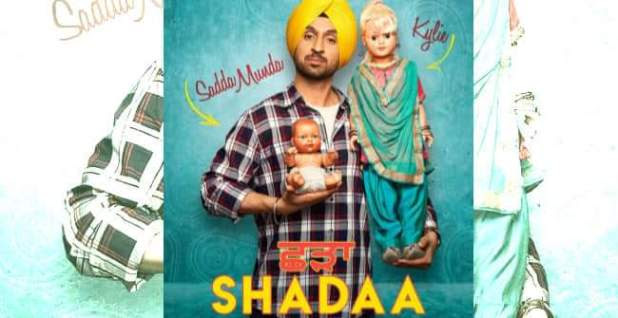 Diljit Dosanjh is one of the most prolific actors and singers in Bollywood. The actor has done some great movies in the past and now is coming back with another one. The star made the weekends of his fans extra special by revealing the first look poster of his next Punjabi film, Shadaa. Diljit and Neeru Bajwa took their social media handles to share the poster of the highly anticipated film.

The most interesting part is that the Jatt & Juliet Jodi will finally appear together after long four years and this has got the fans on the edge of their seats. The last time the pair shared the screen together was in Sardaarji in 2015 and that was a box office hit.

Talking about the poster, it is quite interesting and has a connection to Hollywood makeup mogul, Kylie Jenner. The movie is written and directed by Jagdeep Sidhu, who is known for directing the romantic hit, Qismat and has also written Nikka Zaildar. The movie is produced by Atul Bhalla and Amit Bhalla who belong to A&A Advisors. They have also produced the mega blockbusters, Carry on Jatta 2 and Vadhayiyaan Ji Vadhayiyaan.

Aman Gill has produced movies including Udta Punjab and others whereas Anurag Singh is the known director of the recent blockbuster, Kesari starring Akshay Kumar. The film will be released just after 35 days and fans are eagerly waiting to see what it will offer. It will also revive the legendary Jodi on the screen which we are most excited about.