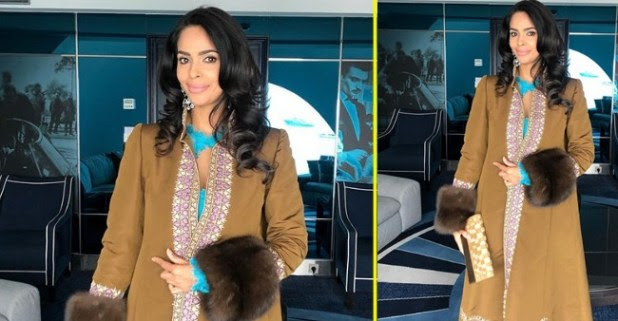 Mallika Sherawat recently stunned everyone with her exceptional look at Cannes 2019 Film Festival. She wore a turquoise blue gown paired with a vibrant tan trench coat. Mallika Sherawat is ready to make her presence at the red carpet soon in the prestigious film festival. In recent times, the actress has posted a series of throwback pictures from her previous Cannes pictures. All her fans and followers are highly excited to watch the new look of the actress at the ongoing Cannes Film Festival 2019.

The actress finally disclosed her first look at the Cannes Festival through her official Instagram handle. After looking at her outfit, all her fans and the followers were truly disappointed. During her first look interview, the actor wore such an outfit with lacy details. She initially shared the picture on Instagram and captioned it as ‘Wearing my favorite dress by my favorite Parisian designer Francois Joseph Graf ( fyi – it’s fake fur) #cannes2019.’

As per the caption, we can understand that it’s the favorite outfit of Mallika Sherawat. The Parisian designer namely Francois Joseph Graf has designed the outfit for the actress. We can see the gown that the actress wore for the event just a little as she concealed it with her gaudy tan trench coat.

The trench coat comes with faux fur sleeves and a tacky embroidered panel on the hem completely spread over the gown. With her outfit, she added a plaid textured clutch bag alongside wearing a pair of earrings. The actress even added a video featuring Mallika looking at the fantastic view from the glass doors. She posted the video and captioned it as, ‘Cannes2019 cannesfilmfestival sundaymood grafparis.’

From the next video, we can witness Mallika posing to the photographer. As per the reports, the actress will make her presence at the red carpet alongside Sonam Kapoor, Aishwarya Rai Bachchan, Huma Qureshi, and Diana Penty.