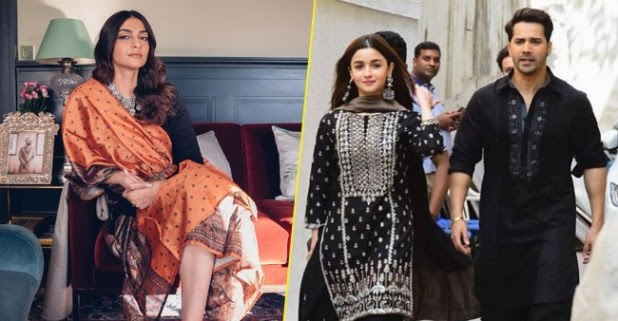 Mostly, Bollywood celebrities often make their fashion statement with their exceptional choices. The outfits that the actors wear doesn’t just reflect their fashion but also the ornaments they choose, the footwear they use also matters. Earlier, the actors preferred heels instead of using flats. But now, the trend has changed and actresses have been showing their interest in wearing flats, sneakers and other types of footwear.

Rhea Kapoor, the sister of Sonam Kapoor preferred wearing Sneakers on her heavy outfit during the sangeet ceremony of her sister. In the ongoing Cannes Film Festival 2019, the actress Deepika Padukone preferred wearing a pair of sneakers on her gown. Alia Bhatt usually steps out wearing Kolhapuris in her traditional ensemble. We have witnessed the actress in Kolhapuris during the promotions of Kalank movie.

Aprajita Toor, the footwear designer recently revealed the reason behind the actresses choosing flats over heels. She said, ‘Only because there is no need to constantly doll up in heels, flats are easier to walk in, so comfort and with respect to the style they can easily be teamed with outfits too.’

When the designer was asked about the impact of this trend on women empowerment then, she said, ‘Yes, more and more women are ditching heels for a pair of comfortable flats. The move of the women wearing open toe style footwear or brogues has been extremely strong. The acts of rebellion have been so small and strong in recent time, where women chose to wear flats over the red carpet or even for their boardroom meetings.’

The popular designer Ruchi Sally of Melissa India recently spoke about the changing trends and fashion in the country. She said, ‘Trends have changed and globally, the statement of fashion has become realistic, which is a blessing to the fashion industry.’ The common people will soon follow this fashion as these Bollywood divas have already started the trend.