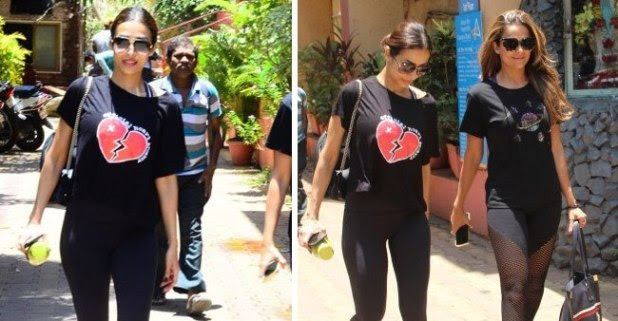 Malaika Arora and Arjun Kapoor’s marriage has been a hot topic since quite a while now. In recent times, Arjun Kapoor also talked openly on why he doesn’t want to get married with his so-called lady love, Malaika

It isn’t that long when Arbaaz’s ex wife was witnessed showing off her ‘love’ in the presence of the media people. Earlier this month, the actress was seen putting on a ‘LOVE’ slogan T-shirt when got photographed by the shutterbugs near her fitness center at Bandra, Mumbai.

The actress is frequently witnessed exercising, be it the gymnasium or her dance class, and it is clear enough that the actress is a real fitness freak.

The reports about Arjun Kapoor and Malaika Arora has been hitting shelves for the longest time, and while neither Arjun nor Malaika hadn’t been approaching regarding their marriage proposals, Arjun appears to have lastly broken his quietness on the issue at the present.

In a media interaction, Arjun Kapoor stated that he’s in no rush to get hitched.

In an interaction with media people, Malaika Arora also said no to reveal the marriage details and stated: “There is no truth to these silly speculations.”

Not only this but also the super star plowed ahead stating in a media talk: “Usually, men lose hair after getting married and not before (laughs). To put things in perspective, as an actor, why would I want to get married when I am sporting a bald look? There would be pictures of it everywhere! On a serious note, I am not getting married. I have not hidden anything from anyone and I think my personal life deserves respect and dignity for that.”

The declaration made by the super star isn’t long back and at this time, the love of his life got snapped putting on a heartbroken t-shirt near the fitness center.

Malaika Arora completed her appearance with black yoga pants and white sliders when clicked by media. Even though the t-shirt had a heartbreak sign, the saying read “official heartbreaker.”