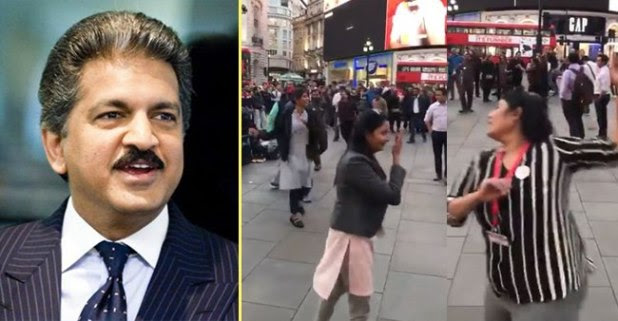 BJP and especially Narendra Modi’s emphatic win is something that people have been celebrating around the world. Recently, the Chairman of Mahindra Group, Anand Mahindra shared a video on his Twitter handle in which people are seen playing garba and dancing after BJP’s victory in the 2019 Lok Sabha elections. The video came to him on WhatsApp, showcasing people having fun after the huge victory in a minute long video. The video sees a lot of people dancing to a famous Gujarati track. We all know that PM Narendra Modi is from Gujarat and also served as the Cheif Minister of the state from 2001 to 2014 before sworning as the Prime Minister of the country.

In my #whatsappwonderbox. Apparently, celebratory Garba in London after PM Modi’s victory. Loved the uninhibited cultural ‘colonisation’ in reverse! And time now for me to brush up my garba steps. Please recommend a good YouTube video for lessons! pic.twitter.com/jvmCz5bjhm

Anand Mahindra shared the video on Twitter and wrote, “In my #whatsappwonderbox. Apparently, celebratory Garba in London after PM Modi’s victory. Loved the uninhibited cultural ‘colonisation’ in reverse! And time now for me to brush up my garba steps. Please recommend a good YouTube video for lessons!”

Some one should tell them to come back to India to enjoy the clean air, water and the law and order.

Mahindra is looking to brush his garba skills as he asked for YouTube lessons. In the replies, he got some suggestions, whereas some users shared videos of celebrations from different parts of the world.

And this is here in Bangalore .. people playing Holi , dancing to the dhol with the Indian flag flying high pic.twitter.com/N8SnXuEWLl

Anand Mahindra is one of the most vocal people on social media. Recently, he reminded people of the country that the world knows it as the land of the Mahatma and we must respect it. This came after Sadhvi Pragya Singh Thakur’s commented on Nathuram Godse.

Looks good. But will probably deserve a Ph.D in Garba if I learn ALL the steps here… https://t.co/qkT60iiP33

He wrote, “For 75 yrs, India’s been the land of the Mahatma; a beacon when the world lost its morality.” “We used to be pitied for being poor but we were always rich since Bapu inspired billions globally. Some things must remain sacred. Or we become the Taliban, destroying statues that sustain us,” he continued.

Pragya called Nathuram Godse, the man who assassinated Mahatma Gandhi as a patriot. She went on win the elections.